NASA’s Perseverance rover has landed safely on Mars. The spacecraft survived its journey through the Martian atmosphere and made a soft touchdown at Jezero crater. Shortly after landing, it sent back this picture from the surface using its Hazard Avoidance Cameras , which it will use when on the move. The image is partially obscured by a dust cover.

What happened: Perseverance began its descent into the Martian atmosphere Thursday afternoon, a process affectionately called the “seven minutes of terror.” The spacecraft survived scorching temperatures thanks to its heat shield. Its parachute deployed without a hitch, the rover was able to locate and navigate toward a safe landing spot, and the descent apparatus lowered the spacecraft down to the surface. NASA confirmed a successful touchdown at 3:55 p.m. US Eastern time. During its descent, Perseverance went from traveling at 12,000 miles per hour to just 1.7 mph in seven minutes.

Because of the distance between Earth and Mars, communication between NASA mission control and the spacecraft is delayed by 11 minutes. That means the entire landing process had to be accomplished autonomously. Onboard systems tracked the surface for hazards during descent and steered the rover away from any threats.

What’s it doing on Mars? Perseverance’s predecessors—Sojourner, Spirit, Opportunity, and Curiosity—led to compelling revelations of what Mars currently looks like and what it once was. Scientists learned that the planet was once a warm planet teeming with lakes and rivers, and that it’s home to complex organic matter. Together, these key ingredients suggest Mars could have been habitable to microbial life in the ancient past. 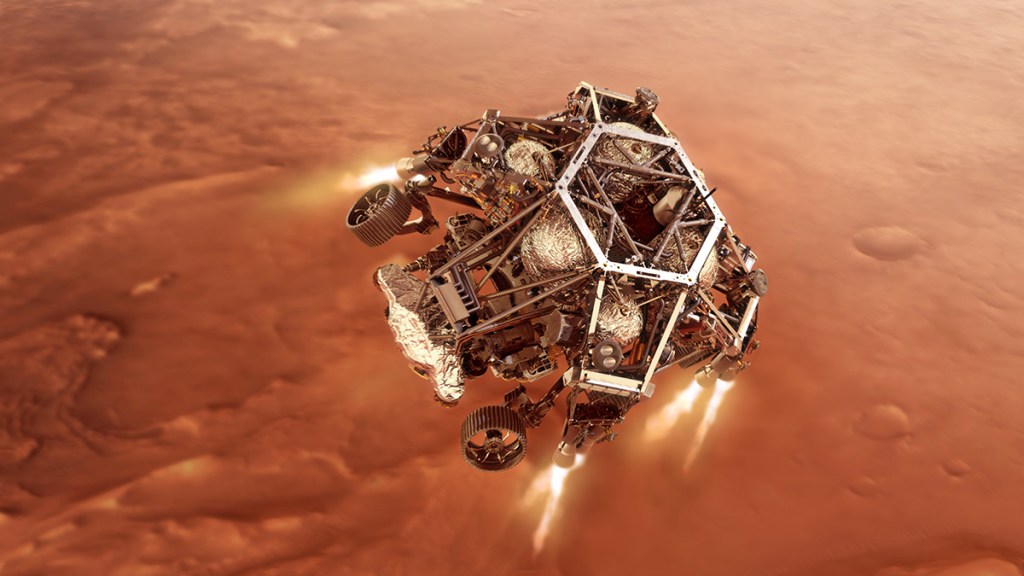 NASA’s Perseverance rover is about to start searching for life on Mars
If the rover makes a safe landing at Jezero crater, it will begin one of the most ambitious missions NASA has ever attempted.

Perseverance’s main goal is to look for evidence of such ancient life. The rover is armed with 23 cameras and a host of instruments designed to find and identify biosignatures (like amino acids or fatty acids) or other macroscopic evidence in rock that indicates there was once life on Mars. It will also drill into the Martian rock and collect samples that will be returned to Earth in the 2030s for closer laboratory study—which could be the first-ever sample return mission from Mars.

The landing site, Jezero crater, is a former lake bed with an ancient delta where waters may have once deposited sediments that could preserve fossilized materials or other evidence of life. Mission control will now spend several weeks testing and calibrating the instruments before the rover begins to explore Jezero in earnest this summer.

Teeming with new tech: Perseverance will also run some other very interesting science and tech demonstrations. A device called MOXIE will turn carbon dioxide into oxygen (and show whether we might one day be able to use this technology to sustain a Martian colony), and a small helicopter called Ingenuity could prove it’s possible to fly aerial missions on Mars and elsewhere in the solar system.

Perseverance is also fitted with two microphones that will provide audio of the rover’s descent through the atmosphere as well as the sounds of the Martian landscape and wind on the surface during the mission.

Busy times at the Red Planet: Perseverance launched last summer as one of three new missions to Mars. The other two, the Hope orbiter sent by the UAE and the Tianwen-1 mission launched by China, made it to Martian orbit last week. Hope will remain in orbit to study the Martian atmosphere, but Tianwen-1 has a rover element that will attempt to land on Mars in May.