NASA officials have an expression for what it’s like to land a rover on Mars: seven minutes of terror. A million things could go wrong as the spacecraft enters the Martian atmosphere and attempts to make it to the surface safely. The drama is made all the more stressful by the 11-minute lag in communications between the planets. On February 18, when the Perseverance rover descends toward the Martian surface, mission control will have no clue whether it succeeded or failed until after the fact.

“There are no guarantees in this business,” Jennifer Trosper, the deputy project manager for the Mars Perseverance mission, told reporters on Tuesday. “But I’m feeling great.” She is an old hand at this nerve-racking experience, having gone through it with Perseverance’s predecessors Curiosity, Spirit, and Opportunity.

Should it succeed, Perseverance will explore Jezero crater, a former Martian lake bed that may be home to fossilized remains of ancient life. But it has to stick the landing first.

The technical terms for the seven minutes of terror is “entry, descent, and landing,” or EDL. It starts when the spacecraft enters the Martian upper atmosphere at around 20,000 kilometers per hour (12,500 miles per hour) and faces rapidly increasing temperatures. Perseverance is protected by a heat shield and shell, as well as a suite of 28 sensors that monitor hot gases and winds. Temperatures peak at a punishing 1,300 °C (2,400 °F).

About four minutes into EDL—roughly 11 kilometers (seven miles) above the surface and still hurtling to the ground at about 1,500 km/h (940 mph)—the rover deploys a 21-meter parachute The spacecraft will get rid of its heat shield soon. Underneath are a slew of other radar instruments and cameras that will be used to set the spacecraft down in a safe spot. Software called Terrain-Relative Navigation processes images taken by the cameras and compares them with an onboard topographical map to figure out where the spacecraft is and which potential safe spots it should head for.

At a little less than six minutes into EDL and around two kilometers in the air, the outer shell and parachute separate from the rover, and Perseverance heads directly for the ground. The descent stage (attached on top of the rover) uses its thrusters to find a safe spot within 10 to 100 meters of its current drop location, and slows down to around 2.7 km/h (1.7 mph). Nylon cords on the descent stage lower the rover to the ground from 20 meters (66 feet) in the air. Once the rover touches the ground, the cords are severed and the descent stage flies away to crash into the ground from a safe distance. Perseverance is now at its new home.

Spirit and Opportunity helped us better understand the history of water on Mars, and Curiosity found evidence of complex organics—carbon-rich molecules that are the raw ingredients for life. Combined, this evidence told us Mars may have been habitable in the past. Perseverance is going to take the next big step:looking for signs of ancient extraterrestrial life.

Why Jezero crater? It’s a former lake bed that’s 3.8 billion years old. A river used to carry water into it, and it is at the river delta where sediments could have deposited preserved organic compounds and minerals associated with biological life.

Twenty-three cameras on Perseverance will study Mars for evidence of life. The most important of these are the Mastcam-Z camera, which can take stereoscopic and panoramic images and has an extraordinarily high zoom capability to highlight targets (such as soil patterns and old sediment formations) that deserve closer study; SuperCam, which can investigate chemical and mineral composition in the rock and has a microphone that will be used to listen to the Martian weather; and the PIXL and SHERLOC spectrometers, which will look for complex molecules that indicate biology. SHERLOC’s Watson camera will also do some microscopic imaging down to a resolution of 100 microns (hardly bigger than the width of a human hair). 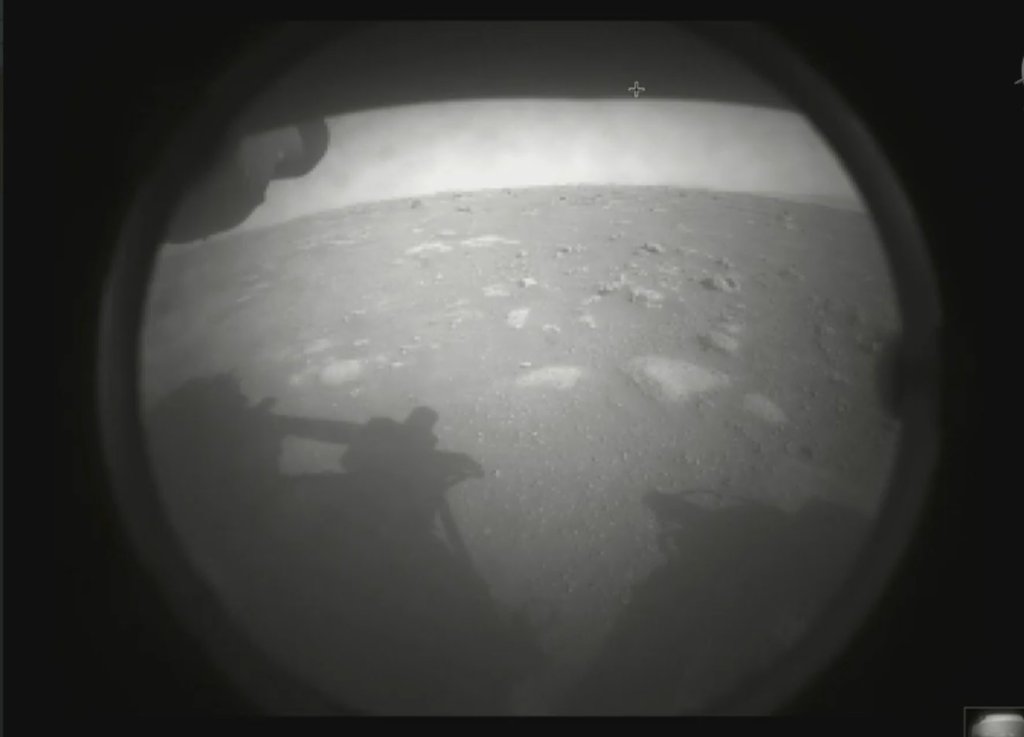 This is the first image taken by NASA's Perseverance Mars rover. Now the hunt for life begins.

After surviving the descent, the rover sent back this picture from the Martian surface.

Briony Horgan, a planetary scientist at Purdue University who’s part of the Mastcam-Z team, says scientists are most interested in finding organic matter that’s either heavily concentrated or could only be the result of biological activity, such as stromatolites (fossilized remains created by layers of bacteria). “If we find particular patterns, it could qualify as a biosignature that’s evidence of life,” she says. “Even if it’s not concentrated, if we see it in the right context, it could be a really powerful sign of a real biosignature.”

After Perseverance lands, engineers will spend several weeks testing and calibrating all instruments and functions before the science investigation begins in earnest. Once that’s over, Perseverance will spend a couple more months driving out to the first exploration sites at Jezero crater. We could find evidence of life on Mars as soon as this summer—if it was ever there.

Like any new NASA mission, Perseverance is also a platform for demonstrating some of the most state-of-the-art technology in the solar system.

One is MOXIE, a small device that seeks to turn the carbon-dioxide-heavy Martian atmosphere into usable oxygen through electrolysis (using an electric current to separate elements). This has been done before on Earth, but it’s important to prove that it works on Mars if we hope humans can live there one day. Oxygen production could not only provide a Martian colony with breathable air; it could also be used to generate liquid oxygen for rocket fuel. MOXIE should have about 10 opportunities to make oxygen during Perseverance’s first two years, during different seasons and times of the day. It will run for about an hour each time, producing 6 to 10 grams of oxygen per session.

There’s also Ingenuity, a 1.8-kilogram helicopter that could take the first powered controlled flight ever made on another planet. Deploying Ingenuity (which is stowed underneath the rover) will take about 10 days. Its first flight will be about three meters into the air, where it will hover for about 20 seconds. If it successfully flies in Mars’s ultra-thin atmosphere (1% as dense as Earth’s), Ingenuity will have many more chances to fly elsewhere. Two cameras on the helicopter will help us see exactly what it sees. On its own, Ingenuity won’t be critical for exploring Mars, but its success could pave the way for engineers to think about new ways to explore other planets when a rover or lander will not suffice.

Neither of those demonstrations will be the marquee moment for Perseverance. The highlight of the mission, which may take 10 years to realize, will be the return of Martian soil samples to Earth. Perseverance will drill into the ground and collect more than 40 samples, most of which will be returned to Earth as part of a joint NASA-ESA mission. NASA officials suggest that this mission could come in either 2026 or 2028, which means the earliest they may be returned to Earth is 2031.

Collecting such samples is no small feat. Robotics company Maxar built the sample handling assembly (SHA) that controls the drilling mechanism that collect cores of Martian soil from the ground. The company had to build something that worked autonomously, with hardware and electronics that could withstand temperature swings from -73 °C (100 °F) at night to more than 20 °C (70 °F) during the day. And most important, it had to build something that could contend with the Martian dust.

“When you’re talking about a moving mechanism that has to apply force and go exactly where you need it to go, you can’t have a tiny little dust particle stopping the whole show,” says Lucy Condakchian, the general manager of robotics at Maxar. SHA, located underneath the rover itself, is exposed to a ton of dust kicked up by the rover’s wheels or by drilling. Various innovations should help it withstand this problem, including new lubricants and a metallic accordion design for its up-and-down movement.

Before any of those things are proved to work, however, the rover needs to make it to Mars in one piece.

“It never gets old,” says Condakchian. “I’m just as nervous as I’ve been on the previous missions. But it’s a good nervous—an excitement to be doing this again.”