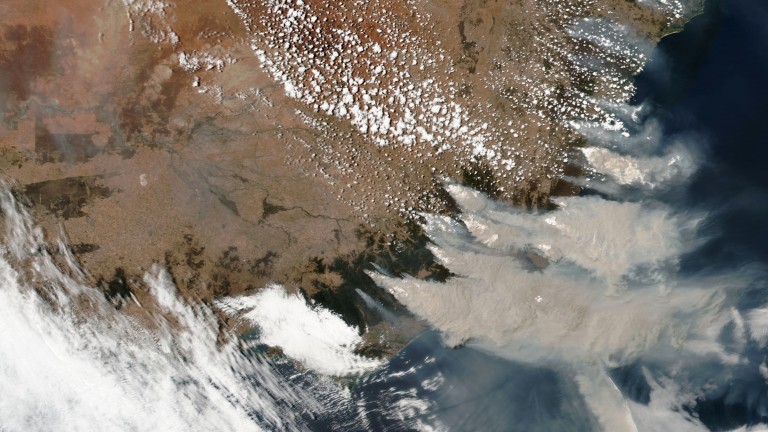 The context: Some of the worst wildfires in decades have been burning across Australia in recent months, exacerbated by hot, dry, windy conditions and rising global temperatures. Almost 15 million acres of land have burned so far, compared with two million acres in California in 2018. But to get a visual sense of the sheer scale of the fires, it’s worth looking at them from space. This NASA image, taken on Saturday, shows smoke billowing from country's east coast.

How are they used? Satellites are often the first tool to detect wildfires in remote areas, using cameras, lidar, and infrared sensors to capture how actively they are burning, their precise location, and the direction of the resulting smoke. NASA has a fleet of satellites it uses to observe Earth, with equipment in geostationary orbit providing imagery every five to 15 minutes. The satellites take a "snapshot" as they pass over the region, capturing an area of up to a kilometer at a time. An algorithm uses infrared data to detect if there are any fires burning, examining each kilometer chunk and labeling it as fire, non-fire, cloud, water, missing data, or unknown. This data is sent to fire management authorities worldwide, and used both for operations and for mapping the scale and type of the damage once the fires have burned out.

See for yourself: This image of the fires shows the areas that have been affected since December. It was created by photographer Anthony Hearsey using data from NASA’s Fire Information for Resource Management System (FIRMS), covering the month up to January 5, 2020. FIRMS sends data to those who need it within three hours of its being captured by two NASA satellites.

More bad news: There’s been some temporary respite in southeast Australia over the weekend, thanks to rain and cooler temperatures. However, that brings its own hazards in the form of dangerous levels of smoke, and the weather is likely to warm up again toward the end of the week.

Read next: A team of researchers are trying to understand the science behind the world’s worst wildfires.