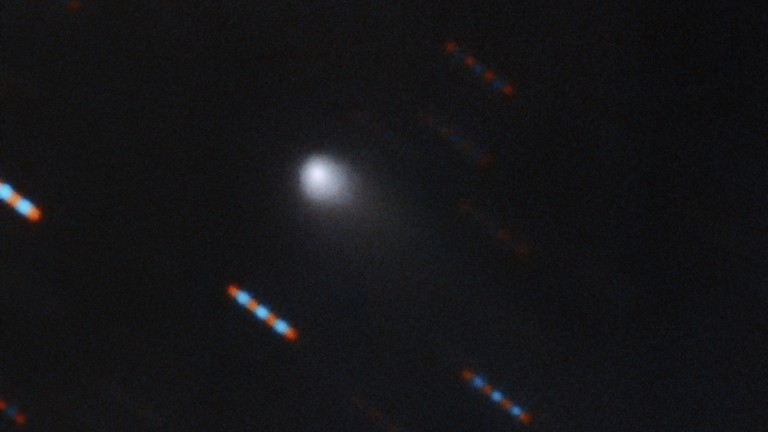 Astronomers have released the first image of only the second interstellar object we've ever seen passing through the solar system. And it's almost certainly a comet.

Meet the comet: Its name is C/2019 Q4 (Borisov), in provisional honor of the amateur astronomer who first discovered it. Follow-up observations revealed a few things about the object. First, it possessed a long tail that almost certainly suggested it was a comet. Second, it has what’s called a hyperbolic orbit, which basically means it’s traveling too fast to be in the sun’s orbit. And if it’s too fast to be moving around the sun, it very likely comes from outside the solar system.

The image: Astronomers at the Gemini Observatory in Hawaii, with help from astronomers using the William Herschel Telescope in Spain, caught a multicolored glimpse of C/2019 on September 10, during a short window of visibility. The new image shows off C/2019’s elongated tail of outgassed matter and hazy coma—two telltale characteristics of a comet. The blurry blue and red lines are images of background stars.

“This is the first certain case of an interstellar comet,” the astronomers write. C/2019 is just the second object on record to visit us from from outside the solar system (the first being the infamously rod-shaped ‘Oumuamua).

What’s next: In contrast to the situation with ‘Oumuamua, we have ample time to plan out investigations around C/2019 and better characterize its movement through the solar system. C/2019 will be closest to Earth on or around December 10.

The Airlock, our newsletter about all things space, is back. Sign up for free here.