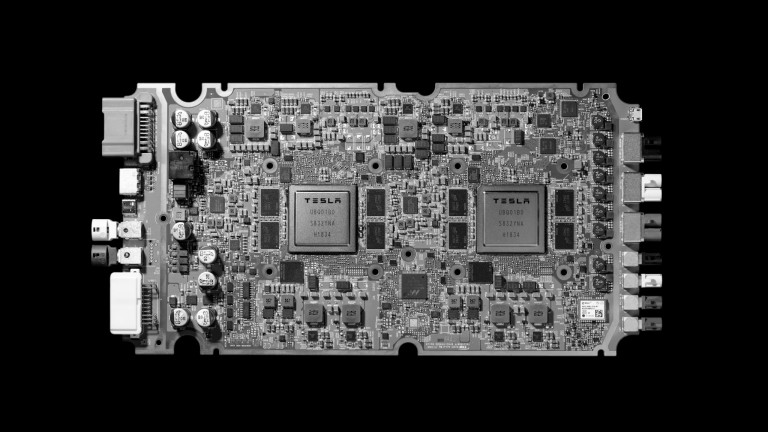 Yesterday, during its Autonomy Investor Day in Palo Alto, California, Tesla unveiled its first custom AI chip, which promises to propel the company toward its goal of full autonomy.

The 260-square-millimeter piece of silicon contains 6 billion transistors and is capable of processing 36 trillion operations per second, the company says. On stage it also claimed that this made its chips far more powerful than the Nvidia chips it had used before, but Nvidia quickly disputed the claim, saying Tesla had made a faulty comparison. Tesla’s self-driving computer board, which comes with two of its chips for redundancy, still has less than half the processing power of Nvidia’s equivalent computer. Regardless, Tesla is confident its custom design is best suited to quickly processing the massive amounts of data collected by its car’s sensors, so it can make safe driving decisions without draining the car battery.

CEO Elon Musk said the boards have already been shipping in the Model S and X for a month and the Model 3 for 10 days, equipping them with the necessary hardware to convert into fully driverless vehicles in the near future. The timing of that will depend on when the company can overcome software, regulatory, and business challenges, but Musk said he feels confident that Tesla will have 1 million robotaxis (without human safety drivers) on the road next year. “I think the most profound thing,” he said in a recent interview, “is that if you buy a Tesla today, I believe you are buying an appreciating asset, not a depreciating asset.”

But this isn’t the first time he’s overblown his vehicles’ capabilities or been over-optimistic about his deadlines. The company was two years late in delivering semi-autonomous features and has yet to complete a hands-free trip across the US, which Musk originally claimed would happen by late 2017.

Correction: A previous version of this story had a typo: the boards have been shipping in the Model 3, not X, for 10 days.