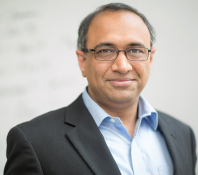 Sanjay Sarma is vice president for open learning, dean of digital learning, and Fred Fort Flowers and Daniel Fort Flowers Professor of Mechanical Engineering at MIT. Sarma has long been at the forefront of the Internet of Things (IoT). As the co-founder of the Auto-ID Center (now Auto-ID Labs) at MIT, he has developed many of the technologies behind the Electronic Product Code (EPC) suite of RFID standards now used worldwide. He was also the founder and CTO of OATSystems, which was acquired by Checkpoint Systems in 2008. Sarma has written more than 75 academic papers on the IoT, sensing, RFID, and automation, and he has received numerous awards. As MIT’s first director (now dean) of digital learning, he has enabled millions of students to access Massive Open Online Courses (MOOCs) through MITx.