These living bricks use bacteria to build themselves 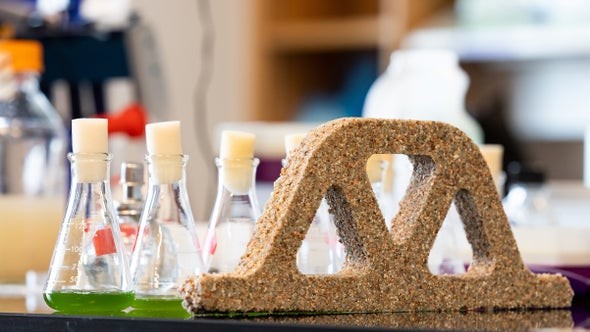 The big idea: A new living substance can transform from a wet sand mixture into a solid brick, and even help to reproduce copies of itself.

How it was created: Researchers from the University of Colorado, Boulder, used a type of photosynthetic bacteria that absorbs carbon dioxide, sunlight, and nutrients and produces calcium carbonate—a rigid compound found in rocks, pearls, and seashells. They grew the bacteria in a warm mixture of salt water and other nutrients and combined it with sand and gelatin. The mixture was poured into a mold, and as it cooled the gelatin set, forming a “scaffold” able to support further bacterial growth. The bacteria deposited calcium carbonate throughout the scaffold, turning the soft sludge into a harder substance after about a day. The mixture looks green initially, but the color fades as it dries. The research was published in the journal Matter and was funded by DARPA, the US military's research arm.

The potential: A major benefit of the new material, the researchers say, is that the whole process revolves around bacteria: they help build the bricks, and are kept alive so they are able to produce more bricks later on. The material could be useful for construction in inhospitable environments like the desert, or even space. It’s also a low-carbon alternative to concrete that could be used to make buildings that absorb greenhouse gases rather than releasing them.