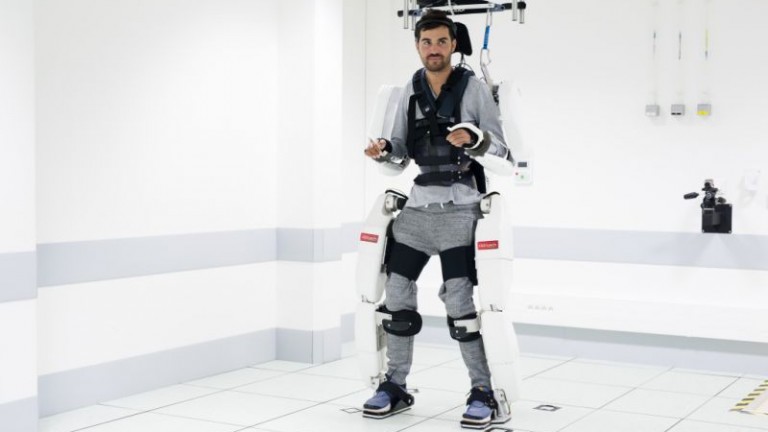 The news: A paralyzed man has walked again thanks to a brain-controlled exoskeleton suit. Within the safety of a lab setting, he was also able to control the suit’s arms and hands, using two sensors on his brain. The patient was a man from Lyon named Thibault, who fell 40 feet (12 meters) from a balcony four years ago, leaving him paralyzed from the shoulders down.

How it worked: Thibault had surgery to place two implants, each containing 64 electrodes, on the parts of the brain that control movement. Software then translated the brain waves read by these implants into instructions for movement. The development of the exoskeleton, by Clinatec and the University of Grenoble, is described in a paper in The Lancet this week.

Herculean effort: Thibault trained for months, using his brain signals to control a video game avatar in order to hone the skills required to operate exoskeleton, which was held up by a ceiling-mounted harness. He was able to walk slowly in the suit and then stop, as he chose.

The future: The hope is that one day similar technology could eventually let people in wheelchairs move them using their minds. It’s an impressive breakthrough, but the device is many years away from being publicly available. For example, researchers need to find a way to get the suit to safely balance itself before it can be used outside the laboratory.