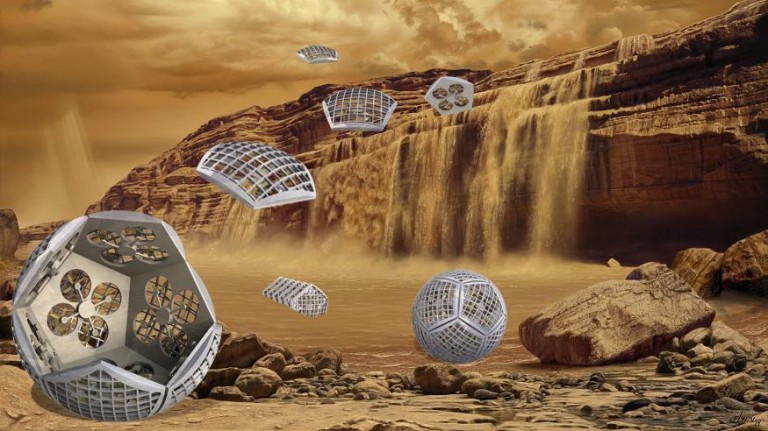 NASA is testing a Transformer-like new robot, Shapeshifter, capable of morphing into multiple configurations. A similar design could one day be used to explore Saturn's moon Titan.

Current status: NASA’s Jet Propulsion Laboratory is now testing a 3D-printed prototype of Shapeshifter. It “looks like a drone encased in an elongated hamster wheel,” according to NASA. It can split into two halves that use small propellers to float through the air like drones.

The future: The fully realized version of Shapeshifter would be a “mothercraft” lander that carries a collection of 12 mini robots (“cobots”) to the surface, acts as the main power source, and uses a suite of scientific instruments that can directly analyze samples. The cobots could work together to carry and move the mothercraft to different areas. They would be able to operate individually or as one cohesive unit, in order to adapt to a variety of terrains and environments.

For example, the cobots would be able to separate and fly out in different directions or together as a flock, link up together like a barrel of monkeys in order to explore narrow caves and caverns, or even float on or swim in liquid.

Why do we need it: More recent investigations of the Saturnian system (thanks in great part to the Cassini mission) have taught us lots about the surface and atmosphere of Saturn’s moons. Titan is an especially alluring target: it has deep lakes of liquid methane and ethane, and its hazy atmosphere suggests it might have active geological features like icy volcanoes that erupt water or ammonia. All this raises hopes that it might have ingredients that are amenable to life.

Will it launch soon? No, afraid not. If testing goes well, NASA might very well greenlight Shapeshifter for a real mission, but this is still a long, long way off in the future. At the very least, these tests might inspire new designs for other future extraterrestrial missions.

In the meantime, NASA is already revving up work on its upcoming Dragonfly mission to investigate Titan via autonomous rotorcraft in 2034.