China says it found something bizarre and unexpected on the moon 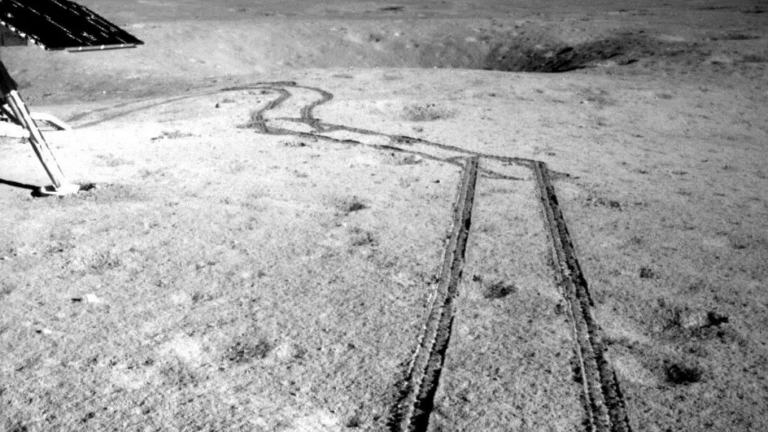 Chinese media is claiming that while investigating the far side of the moon, the country’s Yutu-2 lunar rover stumbled upon a unique “gel-like” substance of unknown origin sitting inside a small crater.

What we know so far: Yutu-2 made the discovery during its eighth lunar day on the moon as it zipped through an area riddled with small impact craters (a lunar day lasts 29.5 Earth days; this one was from late July into early August). A member of the rover’s team noticed a bizarre, colorful luster in one of the mission’s recent images, so the team directed the rover to study it more closely. The only real details China has released so far is that the material is “gel-like,” and that is exhibits an “unusual color.”

What could it be: Right now, the best explanation we have is that the material is not actually a gel, but probably a glass made of rock or regolith that melted in a high-energy meteorite impact on the surface of the moon long ago—possibly the same kind of trininite pieces formed after meteorite impacts on Earth.

Strange materials aren’t unheard-of on the moon—in 1972, Apollo 17 astronauts found orange-colored soil. But no lunar missions have ever come across a glassy or gel-like material. Then again, this is the first mission ever to investigate the moon’s far side.

Yutu-2 keeps punching above its weight: After beating its one-in-two odds of crashing miserably into the surface of the moon in January, Yutu-2 has been rolling on smoothly, studying the moon’s geology as it goes. The rover has already found and analyzed pieces of the lunar mantle thanks to its visual and near-infrared spectrometer—the same instrument employed to study the gel-like substance more closely. There are big hopes discoveries like these will help flesh out the history of water ice on the moon, and give future lunar prospectors direction on how best to harvest it.