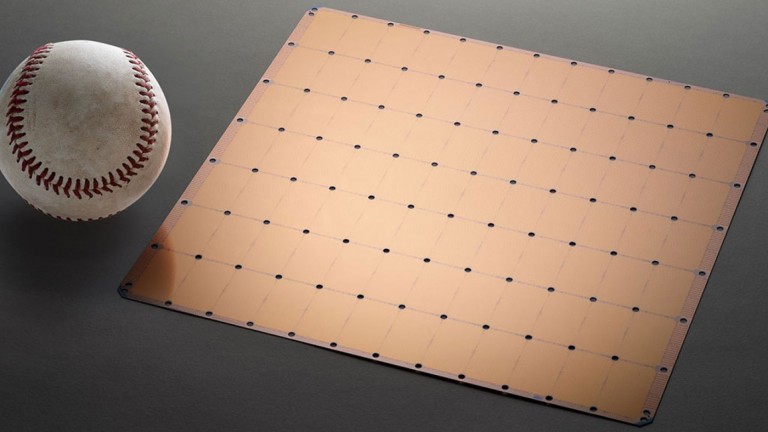 The news: At the Hot Chips conference in Silicon Valley this week, Cerebras is unveiling the Cerebras Wafer Scale Engine. The chip is almost 57 times bigger than Nvidia’s largest general processing unit, or GPU, and boasts 3,000 times the on-chip memory. GPUs are silicon workhorses that power many of today’s AI applications, crunching the data needed to train AI models.

Does size matter? The world’s semiconductor companies have spent decades developing ever tinier chips. These can be bundled together to create super-powerful processors, so why create a standalone AI mega-chip?

The answer, according to Cerebras, is that hooking lots of small chips together creates latencies that slow down training of AI models—a huge industry bottleneck. The company’s chip boasts 400,000 cores, or parts that handle processing, tightly linked to one another to speed up data-crunching. It can also shift data between processing and memory incredibly fast.

Fault tolerance: But if this monster chip is going to conquer the AI world, it will have to show it can overcome some big hurdles. One of these is in manufacturing. If impurities sneak into a wafer being used to make lots of tiny chips, some of these may not be affected; but if there’s only one mega-chip on a wafer, the entire thing may have to be tossed. Cerebras claims it’s found innovative ways to ensure that impurities won’t jeopardize an entire chip, but we don’t yet know if these will work in mass production.

Power play: Another challenge is energy efficiency. AI chips are notoriously power hungry, which has both economic and environmental implications. Shifting data between lots of tiny AI chips is a huge power suck, so Cerebras should have an advantage here. If it can help crack this energy challenge, then the startup’s chip could prove that for AI, big silicon really is beautiful.