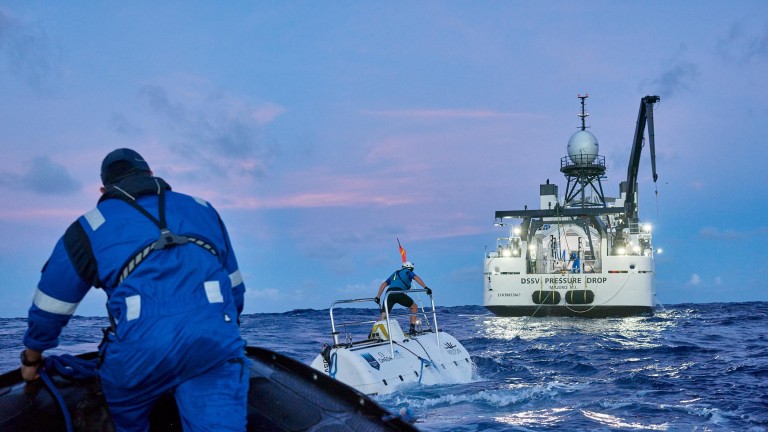 The dive to the ocean's deepest point turned up some surprises.

The news: During a four-hour exploration of the Mariana Trench, retired naval officer Victor Vescovo piloted his submarine to 10,927 meters (35,849 feet) below the sea’s surface, making it the deepest dive on record. He spent four hours at the bottom. The Mariana Trench is in the Pacific Ocean, east of the Philippines and south of Japan.

Epic trip: The Mariana Trench dive is part of a series of dives known as the Five Deeps Expedition: an attempt to visit the deepest point in each of the world’s five oceans. Vescovo, who is funding the mission himself, has already completed dives in the Indian, Atlantic, and Southern Oceans. He is aiming to tackle the Arctic’s deepest point—known as Molloy Deep— in August this year.

Super-sub: The submarine, named DSV Limiting Factor, is 15 feet long and 9 feet wide. It has a titanium hull that is 3.5 inches thick and able to withstand the incredible pressures at the ocean floor. It is built to dive for 16 hours at a time—but also has emergency air supplies for a further 96 hours.

Record-breaker: Don Walsh and Jacques Piccard first reached the deepest part of the Mariana Trench, Challenger Deep, in 1960 in a US Navy bathyscape called Trieste. Walsh was on board the ship that accompanied this latest attempt. Vescovo's Five Deeps team estimate that he went around 50 feet deeper than the Trieste. Film director James Cameron also reached the bottom in 2012.

Unwelcome find: While Vescovo potentially discovered four new species, he also found a plastic bag and candy wrappers. It’s not the first time plastic has been found at the bottom of the sea, but it’s a reminder of the scale of the problem. About 8 million tons of plastic are thrown into the ocean every year, mostly washed into the sea by rivers. There will be more plastic than fish in the sea by 2050 if current trends continue, according to the United Nations.