On February 4, a geomagnetic storm caused by the sun knocked up to 40 new SpaceX Starlink satellites out of orbit. Now experts are worried about whether mega-constellations planned by Elon Musk, Jeff Bezos, and others will be resilient to such events in the future.

SpaceX had launched its latest batch of Starlink satellites on a Falcon 9 rocket from Cape Canaveral in Florida on Thursday, February 3. This was SpaceX’s 38th Starlink launch; in all, the company has launched more than 1,900 of the car-size satellites, and eventually it wants to have up to 42,000 of them in low Earth orbit to deliver the internet to all corners of the globe.

The day after the launch, however, disaster struck. An eruption of plasma from the sun sent charged particles streaming into Earth’s atmosphere, sending the planet’s magnetic field haywire and increasing the density of its atmosphere. That increase in density meant there were more particles to push against satellites in Earth’s orbit. This phenomenon, known as atmospheric drag, can pull them out of their orbital paths.

As a result of the storm, as many as 40 of the new satellites “will reenter or already have reentered the Earth’s atmosphere,” SpaceX said in a statement, describing it as a “unique situation.” These satellites were vulnerable because they are launched into a low orbit, between 210 and 240 kilometers, where the atmosphere is denser, making the effects of the storm worse. The satellites are meant to use onboard ion thrusters to slowly raise their orbits to 550 kilometers over several weeks. Those already in these higher orbits were less affected because the atmosphere is much thinner at that altitude, so drag is reduced.

SpaceX noted that the satellites were designed to completely burn up in the atmosphere, “meaning no orbital debris is created and no satellite parts hit the ground.” A handful of the satellites have already reentered, and the rest are expected to do so within a week. But the financial cost of the botched launch is estimated to be between $50 millionand $100 million. 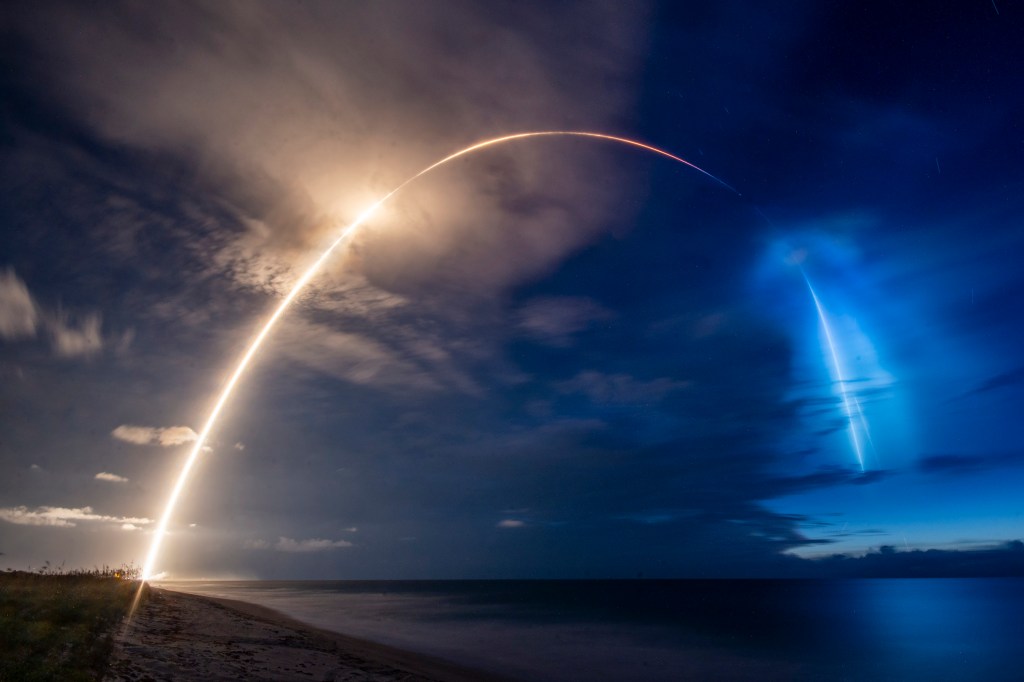 And the event has raised some important questions about the planned rollout and future of mega-constellations. The National Oceanic and Atmospheric Administration (NOAA) had warned of the possibility of a geomagnetic storm days before the launch, yet SpaceX decided to go ahead anyway. Experts are not sure why. “It is a bit weird,” says Marco Langbroek, an astronomer at Leiden University. “Maybe they did not expect the effects to be this large.”

In fact, the storm ranked as a relatively minor G1 on a scale that runs from G1 to G5. While SpaceX said this caused atmospheric drag “to increase up to 50% higher than during previous launches,” the effect was still relatively small. More extreme events can be much more dramatic. “This storm itself was not particularly large,” says Delores Knipp, a space weather expert at the University of Colorado, Boulder. “We’ve seen the atmosphere expand 1,000%. You can get a 10 times increase in density at various altitudes.”

Those bigger effects could come into play relatively soon because the sun is expected to reach the peak of its 11-year activity cycle, known as solar maximum, in 2025. This will make powerful eruptions and geomagnetic storms more common. “There are reasons to be concerned,” says Knipp. “These expansions of the atmosphere will happen on an irregular basis as we move into solar maximum.”

That the Starlink satellites were unable to overcome even a minor storm suggests SpaceX needs to approach future launches differently. It may need to deploy the satellites at a higher altitude, where the atmosphere is thinner, to ensure that they won’t be pushed out of orbit. “Three hundred kilometers should be enough,” says Jonathan McDowell, an astrophysicist from the Harvard-Smithsonian Center for Astrophysics. That could result in “at most a 10% increase in launch costs,” says McDowell.

In turn, that could slightly affect the rollout speed of Starlink: the company would need to fly fewer satellites per launch so that each would have enough fuel to reach higher altitudes. It also means any satellites that malfunction will take longer to reenter Earth’s atmosphere, diminishing what SpaceX had touted as a benefit of launching to lower altitudes: this was supposed to minimize space debris because failed satellites would fall back to Earth more quickly. “It’s a trade-off,” says Hugh Lewis, a satellite expert from the University of Southampton. At 200 kilometers, a dead satellite will stay in orbit for “days at most,” says Lewis, but that period rises to several weeks at 300 kilometers and above.

Managing these mega-constellations could be a problem too. While we have experienced solar maximum with satellites in orbit before, the number orbiting now is unprecedented. By 2025, there could be more than 10,000, not only from SpaceX but from other ventures such as Amazon’s Project Kuiper and the UK’s OneWeb. Future storms could frequently push and pull these satellites, changing their positions and putting them at risk of colliding.

“We’re talking about kilometers in terms of altitude being changed,” says Lewis. “The more satellites that go into orbit, our ability to manage that complexity is going to be limited. At some point, we’re going to see something more severe happening than just 40 satellites reentering.”

Amazon said its constellation, and the design of the satellites themselves, had been designed to cope with this increased solar activity but did not provide specific details. SpaceX and OneWeb did not respond to a request for comment.

This latest event highlights how carefully all mega-constellation operators will need to plan for the effects of solar activity, since any collisions could add thousands more pieces of space debris that could affect our ability to use Earth’s orbit safely. “I have to believe they’ve factored it into their plans,” says McDowell. “Maybe they missed this particular issue, but they have to have run their models, one hopes.”

What is certain is that we are heading into uncharted waters. “This region [of orbit] we’re talking about is so valuable and important," says Lewis. “Everybody needs to do a much better job of using foresight to anticipate these issues.”