Mr. Fu, a driver in Beijing for the food delivery service Eleme, makes about a dozen deliveries per shift. But he could make more—and spill less—if he didn’t have to constantly get his phone out to update his status. “I have to log in every few minutes on the app to avoid being penalized if the delivery is late because of the restaurant,” he says.

In China, fierce competition and the promise of instant delivery drive delivery apps to seek a technological edge. Now Eleme, one of the main players, has rolled out a vast indoor detection system to track drivers and ensure that customers receive their food on time. Wireless advances and the explosion of connected devices—including smartphones—have made this system possible.

Eleme, which has 83 million monthly active users, is owned by the tech giant Alibaba, which also owns Taobao, one of the world’s biggest e-commerce platforms. Since launching the new system in hundreds of Chinese cities starting in 2018, Eleme says, it has saved merchants $8 million in refunds to customers for problems with their deliveries, including lateness.

To build it, Eleme had to find a cost-effective system that works indoors. GPS is accurate to five meters outside, but walls, furniture, and even people disrupt its signals. “It’s also really bad at elevation,” says Pat Pannuto, a computer science professor at the University of California, San Diego. That’s a problem because most urban retailers in China are in multistory buildings.

Indoor localization systems based on Wi-Fi and radio-frequency identification do work, but Bluetooth is by far the cheapest, most reliable option. Its accuracy is roughly 10 meters, good enough to detect people walking into a shop or restaurant.

In early 2018, Alibaba placed more than 12,000 Bluetooth beacons in shops across Shanghai. Beacons emit signals that are picked up by drivers’ phones in the form of “ID tuples.” The app uploads each tuple to the platform’s servers, where it’s matched with merchant IDs, and the system logs where and when the signal was sent.

Similar networks are widely used for tracking goods, people, and services. One of the largest is in London’s Gatwick Airport, where around 2,000 Bluetooth beacons are installed. But Eleme’s is one of the first to be built out on a city scale.

To take its system to more cities in China, Alibaba exploited the fact that mobile phones can also act as Bluetooth beacons. Apple introduced this function for iOS devices in 2013, and similar features are now widely available on other smartphones. 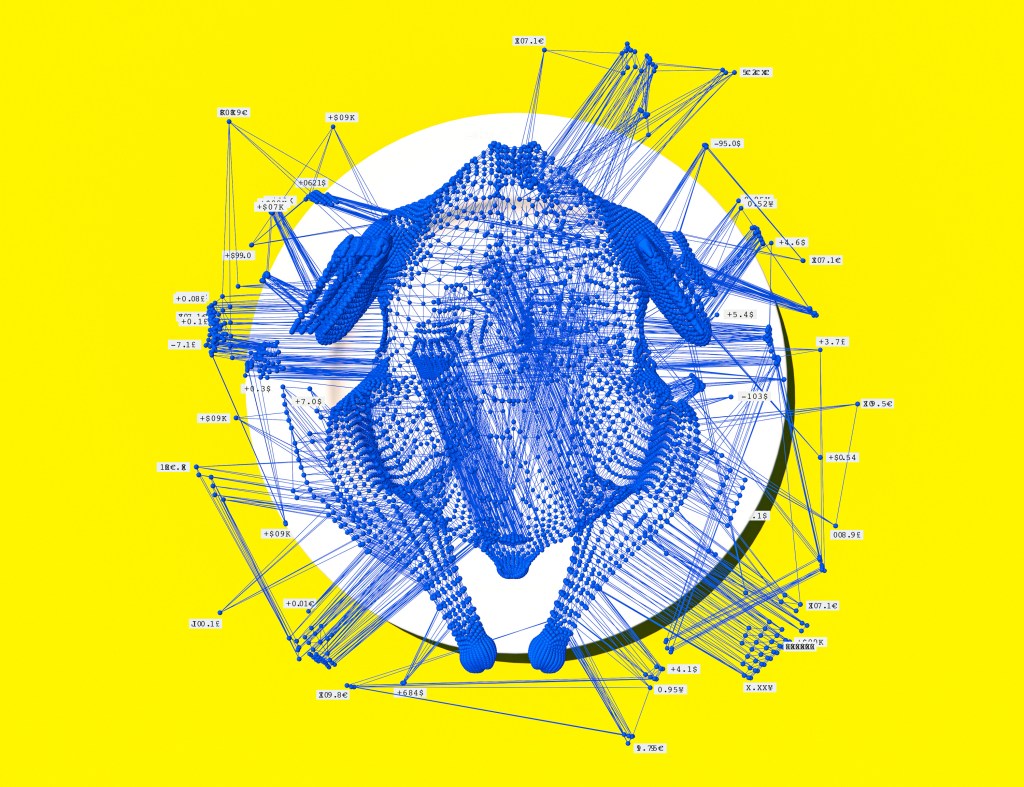 Technology can help us feed the world, if we look beyond profit
Powerful technologies like genetic modification aren't the enemy of a healthy, sustainable food system.

Using this technology, more than 3 million merchants and a million drivers signed on to a pilot program to use their phones as beacons or receivers, delivering 3.9 billion orders to 186 million customers in 364 Chinese cities.

For now, the system simply acts as a check on the driver’s own logs, and it still requires drivers and merchants to have the app open on their phones to guarantee a connection. If drivers try to report their arrival before their phone receives a signal from a merchant’s phone, the app sends a “too early” prompt.

It’s not perfect—merchants can game the system by disabling Bluetooth, so couriers’ apps don’t log the time they spent waiting to pick up an order. And virtual beacons are less reliable than physical ones.

In theory, having more accurate data on drivers’ locations means the system can better assign upcoming jobs and ensure that drivers can complete their deliveries in time. Alibaba says automation makes delivery drivers’ work easier, but it may also intensify pressures on the job.

Alibaba hopes drivers’ phones could one day become both beacons and receivers so their handsets could locate each other without relying on merchants’ virtual beacons. The security and privacy implications of operating so many beacons are unclear.

Pannuto says the scale with which Alibaba has expanded the system is impressive. He isn’t convinced it will be replicated elsewhere, but in China, where delivery remains cheap and demand high, companies are eager to find any way to outshine the competition.

Yuan Ren is a science and technology journalist based in London.