Almost exactly a year ago, software developers rushed to build technologies that could help stop the pandemic. Back then, the focus was on apps that could track whether you’d been near someone with covid. Today the discussion is about digital vaccine credentials, often called “vaccine passports,” designed to work on your smartphone and show that you’ve been inoculated.

The latest launch came on May 17 in England, with the National Health Service’s new digital credential for crossing borders. Here’s what we know about it:

Experts are already keeping an eye on whether the NHS pass expands beyond its current scope. Imogen Parker of the Ada Lovelace Institute notes that there's already been resistance to a pass that would need to be shown at places like pubs and shops. “It will be important to monitor whether Monday’s rollout is a prelude to more extensive use,” she says. “But it’s welcome that the government appears to be treading very carefully.”

The NHS app is not the only vaccine credential in development. Around Europe, governments are working on—or have already launched— smartphone-based vaccine passports. That includes the EU itself, which proposed a digital “green certificate” in mid-March. France’s TousAntiCovid contact tracing app was updated last month so that it can show a vaccination certificate or a negative test result, although now other countries need to accept it. Italy’s innovation minister, meanwhile, has said the country might adapt its Immuni exposure notification app to include a vaccine credential, and German officials say they hope to roll one out by the end of June 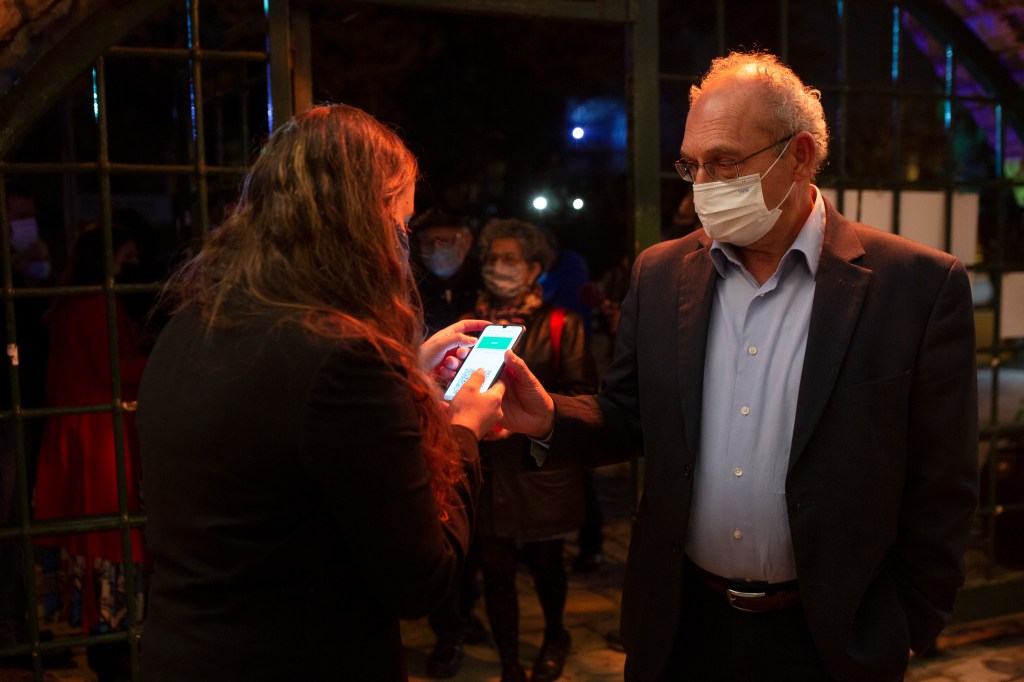 There are plans all over the world for apps and cards that would prove vaccination. But Israel’s experience suggests major caveats.

Outside of Europe, the picture is even more mixed. Israel launched its “green pass” in February, and Singapore’s TraceTogether app can now show proof of vaccination. In the US, officials have said they will not develop a federal app, so various states and private companies are creating a patchwork of approaches. Private and nonprofit initiatives are also working on their own systems and protocols, including Linux Foundation Public Health, the biometric security company CLEAR, various initiatives linked to the travel industry, and more.

Elizabeth Renieris, a tech and human rights fellow at the Harvard Kennedy School’s Carr Center and a fellow with the Digital Civil Society Lab at Stanford University, says the hype over vaccine passports—both in the US and globally—sounds eerily like the rollout of covid exposure apps last year. She says those apps launched in a rush, and with a slew of unanswered questions about how they could support public health goals in useful ways.

“There’s a kind of ‘rinse and repeat’ happening,” she says. “We need to think about how technology becomes a proxy for governance. It creates the illusion of having things under control.” She points to what’s happening in India right now: “You have Modi pushing a new app, and all the experts in the country are screaming, ‘We need vaccines.’”

It should be said that vaccine credentials and exposure notification apps are technically very different things. Exposure notification apps usually work anonymously and invisibly, using Bluetooth signals between phones. Vaccine passports, in comparison, are digital documents tied to real names and offered up to strangers as evidence that they can be near you without fear of infection.

But other issues are similar, such as the way they are built, the kinds of entities involved, and the fact that new systems are being rolled out in a high-pressure environment. And some of the same questions apply, especially when it comes to how the technology works—or doesn’t—with public policy.

Luca Ferrari was deeply involved in the launch of Italy’s contact tracing app, Immuni, as the CEO of its developer, Bending Spoons (the company is no longer involved in running the system). Immuni launched in June 2020, built with what Ferrari says was about 30,000 hours of donated labor—but navigating the connections between technology and public authorities was tricky.

“Everybody we dealt with [at the government] was genuinely determined to help people,” he says. “But a slight misalignment of priorities and objectives created major headaches and slowdowns.”

For instance, he says, Immuni required users who tested positive for covid to contact their local public health officials. But those departments were often too stretched to properly handle the requests—and so the app didn’t get used as much as originally hoped.

He also says the government allowed confusing information about the trustworthiness of the app to flourish—and waited too long to counteract it.

Still, he says, the next wave of pandemic tech can learn now from those lessons, and any future public health emergencies can benefit, too: “I would encourage authorities to try to leave the pandemic with a tool kit that we can unearth again.”

Globally, Parker and her team at the Ada Lovelace Institute have been carefully monitoring how digital vaccine credentials roll out. Last week they released a 110-page report of recommendations [pdf]. And while it’s too early to weigh up how the NHS app will fare, “they are going quite slow,” she says, “which I think is a good thing.”