After being released from Walter Reed National Military Medical Center on October 5, US President Donald Trump praised the doctors who treated him for covid-19 and promised that the public would soon have a vaccine against the deadly coronavirus. “We have the best medicines in the world, and very shortly they are all getting approved, and the vaccines are coming momentarily,” he said in a video statement shared with millions of Twitter followers.

Across the country, in California, a doctor named Eric Topol was responding in real time on social media. He questioned the president’s health, his doctors’ actions, and even his mental status.

By that point Topol, a heart expert and researcher with a huge Twitter following of his own, was already weeks into a personal campaign to make sure the administration could not rush a covid-19 vaccine through regulatory authorization before Election Day on November 3.

An editorial in the New York Times had raised the possibility of an “October surprise” vaccine back in June, and warned that a vaccine approval could turn into a “campaign stunt.” Topol, who works at the Scripps Research Institute in La Jolla and is one of the country’s most prominent doctors, aimed to prevent Trump from greenlighting a vaccine before scientists could prove it to be safe and effective. To Topol, developing an effective vaccine against covid-19 is “the biggest event in our generation” and one that should be evaluated on the basis of scientific data, not political implications.

If Trump badgered the US Food and Drug Administration into prematurely releasing a vaccine that wasn’t effective, or even caused harm, it could shake the public’s trust in any covid-19 vaccine. And if we are to achieve wide immunity against SARS-CoV-2, we'll need to vaccinate more people than the number that get flu shots each year. Releasing a vaccine that people are afraid of could do more harm than good.

To prevent such a scenario, Topol led online calls for FDA commissioner Steve Hahn to resign after his agency was criticized for cowing to political pressure—and then phoned Hahn a number of times to urge him to resist Trump’s influence. Topol also targeted Pfizer, the only pharmaceutical company likely to seek approval of its vaccine before Election Day, which eventually set up a meeting for him with its vaccine team.

On October 16, Topol and his allies were able to claim success: Pfizer CEO Albert Bourla said the company would not be able to seek emergency approval for its vaccine before the third week in November, owing to safety standards that had been put in place by the FDA. Those standards had been issued against Trump’s wishes, but at the urging of Topol and other advocates.

Since the outbreak started, the White House has been at odds with its science agencies and has sometimes steamrolled them in key decisions. For instance, political appointees have changed advice from the US Centers for Disease Control and Prevention about testing and opening schools. The FDA, which oversees vaccines, is one of the strongest agencies in Washington. But during the pandemic it has come under pressure to make new covid-19 drugs available, even those with little evidence to back them up.

Evaluating a new drug or vaccine is typically a long process. But after the 9/11 attacks, Congress introduced a fast-track option called “emergency use authorization.” The idea was that in the event of, say, a nuclear attack, the usual rules could be set aside. Instead of proof that a treatment works, the emergency standard requires only a “reasonable” belief that the treatment “may be effective.”

The flexible process also allows political decision makers to take control as they did in August, when the FDA announced an EUA for convalescent plasma therapy (pdf), a treatment involving blood serum donated by covid-19 survivors. Just a day before the agency allowed wider use of the treatment, Trump accused it in a tweet of deliberately postponing the decision until after the election.

While there was incomplete evidence to show the treatments worked, most people agreed the transfusions could meet the loose “may be effective” standard. But during a White House press conference, officials departed from the evidence to tout the treatment as a “major advance.” And an FDA press release headlined “Another achievement in administration’s fight against pandemic” was oddly triumphant for an agency whose communications are normally dry and technical. Clearly, someone other than agency scientists was now writing the script.

What alarmed Topol and other critics is that Hahn played along and badly misrepresented the facts, saying plasma transfusions would save 35 out of 100 covid-19 patients. In reality, no evidence for that claim existed. The therapy’s benefit remained uncertain.

“That was the moment I decided, it’s time to become an activist,” says Topol. “I got very upset. I said he should resign or tell the truth. There was just this complete subservience to Trump.”

Topol began loudly calling on Hahn to confess or step down. Others joined the campaign. “Eric has courage, no question about that—he’s not afraid to stand up for things,” says Holden Thorp, editor of the journal Science. “He has a huge amount of credibility scientifically, combined with an enormous platform.”

In an editorial in Science Translational Medicine entitled “We’re on our own,” Thorp weighed in too, saying Hahn’s distortions of science meant he could no longer be trusted to handle a vaccine. “The administration knows that Hahn caved … after it pressured him,” Thorp wrote. “So why not try it again.”

Hahn later apologized, but his error gave critics leverage. “That event was fundamental,” says Topol. “I think [the FDA was] sensitive to external pressure that this cannot be tolerated with a vaccine.”

Topol says he and Hahn had several private phone conversations in the weeks following the debacle. What they said is confidential, but all signs indicate that Topol urged Hahn to defy the White House effort to deliver a vaccine by Election Day. “I came to respect him,” says Topol. “I was convinced he’d do the right thing.” An FDA spokesperson declined to comment on the phone calls.

To stop rush authorization of a vaccine before the election, Topol also began working on another front. The US has poured billions into Operation Warp Speed, which includes funding for a half-dozen trials to study potential covid-19 vaccines. Those trials won’t have efficacy data on the vaccines until late in the year, at the earliest.

But one company—Pfizer—never joined the federal program and has been running ahead of the companies that did. Its CEO, Bourla, had boldly said for months that its study of a genetic vaccine would have early efficacy results in October. If Trump could anoint any vaccine as the winner, it would have to be Pfizer’s. On the other hand, if no company actually applied for authorization before November 3, then no announcement could be made. Pfizer was the “choke point,” Topol believed.

On September 25, Topol joined 60 other experts in sending a letter to Pfizer’s CEO, asking that the company not apply for an EUA before late November, when there would be more safety data. Topol says he also peppered some of Pfizer’s board members with his concerns. The company later reached out to him, arranging an early October Zoom meeting with Kathrin Jansen, its vaccine chief, and her team. Pfizer confirmed the meeting, saying its staff regularly meets with “key opinion leaders.”

“Whether you are Pfizer, Johnson & Johnson, or Moderna, you want to win the race. But that is a different motivation than Trump has. He’s in a different contest,” says Topol. “Trump wants to win, but we need all the companies to win, because none can make enough vaccine [on] their own.” 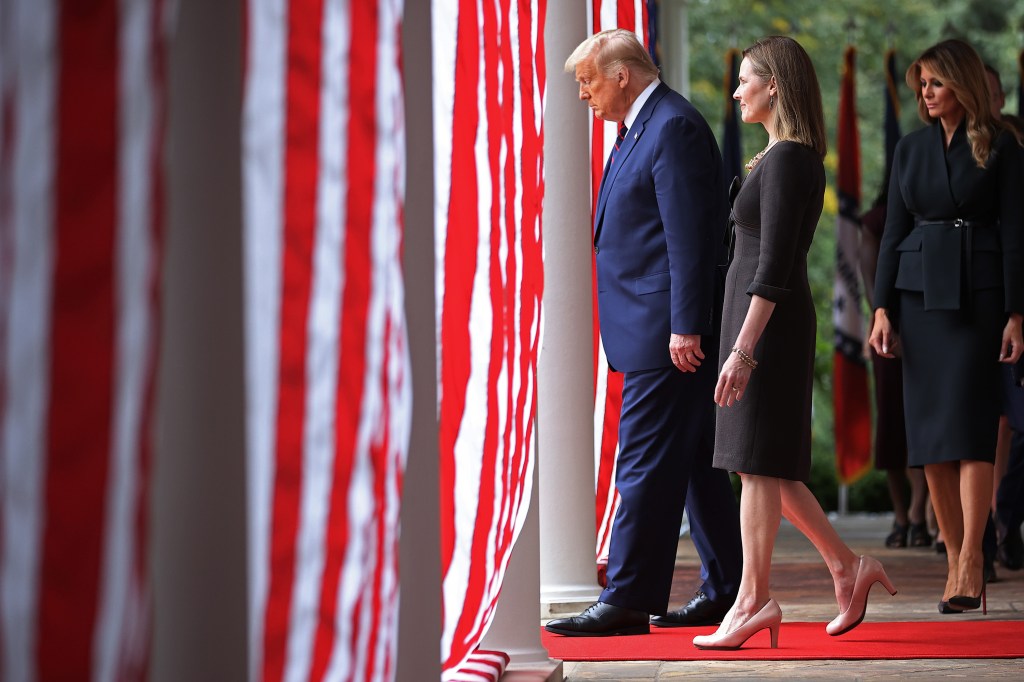 Trump’s antibody treatment was tested using cells originally derived from an abortion
The Trump administration has looked to curtail research with fetal cells. But when it was life or death for the president, no one objected.

Any push to rush through a vaccine approval, in other words, would be motivated politically more than medically. Even though the pandemic is killing more than 600 people a day in the US, Topol doesn’t believe very much can be gained by declaring success a few weeks early. “We’re still going to be physical distancing and wearing masks after a vaccine. It’s not magic,” he says. “It’s more important that we get it right.”

Still, many experts say there’s no reason the EUA mechanism can’t apply to a vaccine. A military vaccine for inhalation anthrax—impossible to test because hardly anyone gets that disease—was cleared in that way.

“I don’t think that EUA is a bad idea. To me the question is, how good is the evidence?” says Alison Bateman-House, a professor and health policy researcher at NYU Langone Medical Center. “In the US, there is a lot of pressure to bring something forward, but in the biopharma industry, there is also a lot of pressure to play by the book.”

In fact, though Trump had accused “deep state” players at the FDA of delaying the approval of plasma therapy, the connections between doctors, drug companies, and health agencies run even deeper than he probably realized. All are heavily invested in evidence-based drug approval. “The fact is that drug corporations are composed of a lot of scientists,” says Thorp. “It makes it harder for Trump to paint the entire group into his ʹdeep state’ enemies category.”

By the time Trump left Walter Reed and said vaccines could appear “momentarily,” the chance that any vaccine would be approved before the election was actually about to disappear. The White House had been holding up publication of an FDA recommendation that companies developing any covid-19 vaccine should search for side effects for at least two months in half their trial patients. If that guideline were followed, it would make an EUA in October essentially impossible, even for Pfizer.

On the same day of Trump’s discharge, the FDA transmitted its recommendation to a key vaccine advisory committee, in what outside observers viewed as an end run past the White House. An FDA spokesperson said that nothing out of the ordinary had occurred. But Topol believes Hahn and his deputies “stood up to Trump for the first time” and executed a “masterful” tactical maneuver. “Bureaucratic jujitsu,” Thorp calls it. By the next day, the Wall Street Journal reported, the White House had “cast aside” its objection to the rules, allowing the FDA to publish them in full.

The import of the maneuver wasn’t lost on Trump, either.

A week later, on Friday, October 16, Pfizer—citing the FDA recommendations—finally said it would not seek an EUA until after the election, even if the company thought its vaccine was working.

Daniel Littman, a board member at Pfizer, says Topol never contacted him, but he agrees that the company found itself in a difficult position. “My guess is that this reflects Albert Bourla’s response to the general politicization of the process, and the reaction by members of the scientific and medical community, not only Topol,” says Littman. “I’m glad that there was further clarification from Pfizer.”

While a vaccine approval before November 3 may now be out of the question, other medical developments in the fight against covid-19 could still come into play during the countdown to the vote. During his stay at Walter Reed, Trump received a cutting-edge experimental antibody treatment developed by the biotech company Regeneron. A similar drug, which blocks the virus, is being tested by Eli Lilly. Although neither company has published scientific results of its drug tests, Trump touted the drugs as “cures” for covid-19 when he was released from the hospital.

Within days, both companies filed for emergency use. Those authorizations could still come before Election Day.