Ford Motor Co. this week tapped Jim Hackett—a former office furniture chief executive who has been running its ride- and vehicle-sharing division since March 2016—to assume leadership of the company.

Hackett’s assignment: to transform the 114-year-old automaker from a company that designs and sells vehicles driven by their owners into one that makes autonomous vehicles (see “What to Know Before You Get In a Self-Driving Car”). He quickly got to work announcing a series of executive shifts, including the return of Sherif Marakby, who had left the car maker for Uber last year, to oversee Ford's self-driving and electric car businesses.

Today carmakers sell to individual drivers through an extensive network of dealers, which makes profits both selling and servicing cars. In a world of self-driving vehicles, individuals could stop buying cars, and instead use fleets owned and operated by a third party. Ford and its competitors could become the manufacturer and third-party owner, a seller of rides as well as vehicles.

Hackett, 62, lands the job right as the auto industry seems on the verge of a cyclical downturn in sales following six straight years of unit-sales increases, and following several years of poor stock performance for the company. Unlike the man he is replacing—Mark Fields, a 28-year Ford veteran who guided the automaker for less than three years—Hackett does not have a conventional résumé for an auto industry chief executive. He is best known for running Grand Rapids, Michigan-based Steelcase Inc., once a maker of desks and filing cabinets. He gained a reputation in Silicon Valley as a creative thinker skilled at leading comprehensive organizational change, and attracted the attention of Bill Ford Jr., the automaker’s executive chairman. After Steelcase he spent 17 months as interim athletic director at the University of Michigan—where he had played football under the legendary Bo Schembechler—overhauling a struggling football program.

Though driverless technology is under Ford research and development and the direction of Ken Washington, Ford’s new chief technical officer, during Hackett’s time as chairman of the mobility business he became more familiar with the technological challenges of automated driving. In February, he praised Ford’s commitment to acquire and invest $1 billion over the next five years in Argo.ai, a small artificial intelligence startup created by former leaders in driverless tech at Uber and Google. 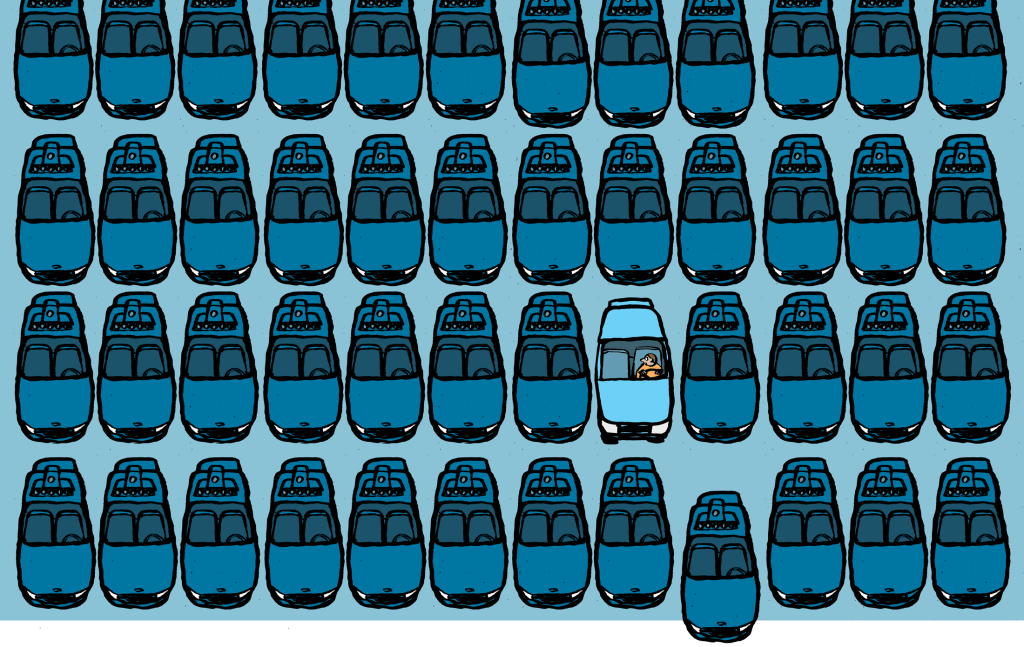 Related Story
Uber thinks its self-driving taxis could change the way millions of people get around. But autonomous vehicles aren’t any­where near to being ready for the roads.

The move acknowledged that Ford, which has hundreds of its own people working on autonomous driving, needed still more talent in the driverless category and was willing to spend aggressively to get it. “The problem we have to solve—and there won’t be many bigger than this—is about picking large amounts of data, blades of grass being collected by a lawn mower traveling at 70 miles per hour, and organizing and making sense of all of it. It’s a much harder problem than the world realizes,” Hackett said at the time.

Building a business model for this new era will be tricky. Bolstered by its F Series pickup truck, Ford has been solidly profitable for the past three years, with revenue reaching $141.5 billion in 2016. Now Ford must also find a way not to be left behind Google and others that are moving quickly to develop driverless technology. In the same way that Hackett deciphered the changes in workplace culture and how those changes affected furniture design and manufacturing, he must define and convey the vision of future mobility solutions to Ford’s 200,000 workers, partners, and dealers and the impact on future products and services.

“Dealers see a lot of money being spent on things like artificial intelligence and never hear what that means,” says one dealer, who requested his name not be used. “Is Ford creating cars that won’t need service, electrical vehicles that have far fewer moving parts? What does all this mean to me, a dealer?”

Scott Cook, cofounder of software maker Intuit, says that at Steelcase Hackett displayed the ability to instill “design thinking” in engineers. Many customers were new economy companies trying to create “work spaces” rather than conventional offices and cubicles. Under Hackett, Steelcase once held a majority of IDEO, a design firm founded by David Kelley, a celebrated Stanford professor, and eventually convinced Steve Jobs to buy furniture for Apple Inc.’s iPhone headquarters from Steelcase.

Changes in the office furniture business and other workplace trends forced an immense reorganization at Steelcase. Companies began requesting “open office” plans designed to encourage more collaboration among employees. Workers became increasingly mobile, spending time away from the office. Then came the recession and a drop in corporate spending.

Related Story
Mark Fields, the head of Ford, says cars that can drive themselves may need to learn some more human traits.

Eventually Hackett cut 57 of the company’s work locations and 12,000 jobs—including one held by a friend who served as best man at his wedding. He delivered that pink slip in person, meeting with many others to commiserate and to discuss life and work post-exit, often amid tears.

“A lot of people had to leave, and yet I was trying to make the case that if we aren’t modern, we are going to be dead,” Hackett said at the time of his retirement in 2014 about the message of a speech he had made in 2004. The strategy worked. Steelcase remains in operation today, its stock well up from its lows.

Last week, Ford said it plans to cut 1,400 jobs from its salaried workforce in an effort to adjust to the market’s expected decline and to boost a sagging stock price.

"We need to be quicker in our decision making ... have clarity in our messaging and communication, and also need a leader who's transformed a company before," Bill Ford said at a press conference on Monday morning.

Last August, the Dearborn, Michigan-based company announced the investment in a number of startups related to driverless tech and the “intention to deliver a high-volume, fully autonomous vehicle for ride sharing in 2021.” But competition in this space is high from traditional car companies such as GM, Toyota, and Fiat Chrysler, and also from a whole new set of competitors: Tesla, Lyft, Uber, Google’s Waymo, and Intel’s Mobileye as well as suppliers like Continental, Delphi Automotive and Bosch (see “Ford CEO Explains Why It’s Hard to Build Self-Driving Cars”).

Under Hackett, Ford must step up its recruitment of scarce talent to a workforce that increasingly will be comprised of software engineers, experts in artificial intelligence, digital mapping specialists, and those with proficiency in sensing devices such as radar, lidar, and cameras—all components of driverless technology. And the newcomers must integrate harmoniously with those already working in the more conventional skills of building and designing vehicles.

Normally when a company buys creative talent, that talent eventually drains away, notes Cook. But after Hackett’s investment in IDEO, its star, David Kelley, stayed. “Jim has a track record of being able to work with high talent,” says Cook. “He leads from the positive.”