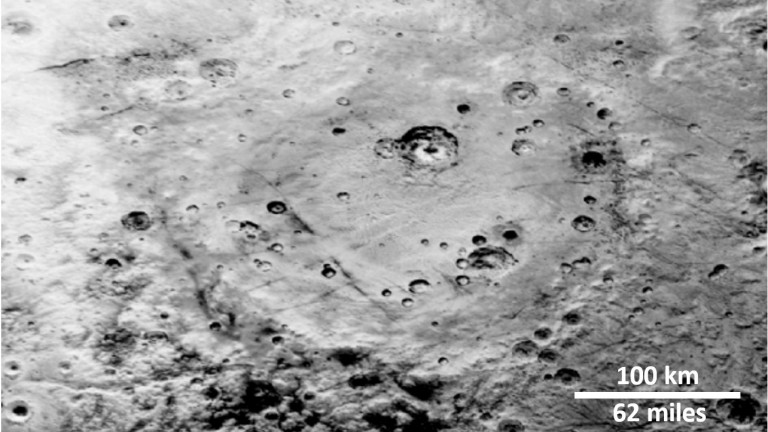 Pictures taken of the dwarf planet and its moon Charon by the New Horizons probe are changing what we know about the mysterious Kuiper Belt.

Some background: The Kuiper Belt sits beyond Neptune and is filled with a number of small, icy bodies. We don’t know a lot about what’s in it, because it’s so far away and small objects are hard to spot at that distance. However, Pluto has run into plenty of small Kuiper Belt objects over the years, creating a representative sampling of what’s really out there.

The news: A study published in Science today estimated the numbers of Kuiper Belt objects in a variety of sizes by looking at pictures taken by the New Horizons probe as it zipped by Pluto and Charon in 2015. Pictures of the surfaces showed that craters smaller than 13 kilometers were rare. While Pluto has changed geologically, Charon has stayed relatively stagnant, meaning it’s unlikely that any craters have been erased. Craters of around 13 kilometers on Charon are made by objects around two kilometers wide, indicating that there probably aren’t many Kuiper Belt objects smaller that.

What it means: So why do we care about the size of these icy rocks? The profile of these objects can give clues about how our eight planets formed. For one thing, it shows that the Kuiper Belt’s formation was different from that of the asteroid belt between Mars and Jupiter, says lead author Kelsi Singer. “Perhaps the asteroid belt has more small bodies than the Kuiper Belt because its population experiences more collisions that break up larger objects into smaller ones,” she says.

Want to keep up with space technology news? Sign up for our space newsletter, The Airlock.