Radar has found liquid water on Mars, but don’t expect anyone to drink it 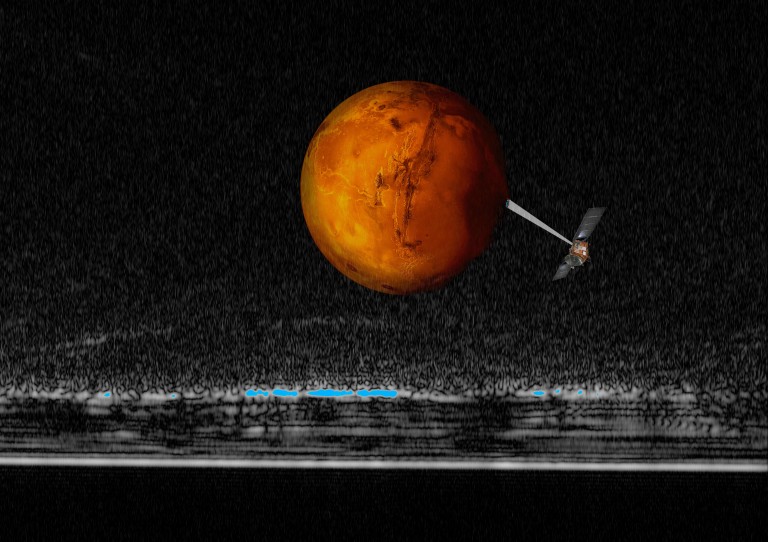 Until now, the stuff has only been found in the form of ice and in small quantities in the atmosphere.

The news: According to an article in the journal Science, a group of Italian researchers working with the European Space Agency (ESA) has detected a lake about 1.5 kilometers (1 mile) below the surface of Mars and 20 kilometers long, close to the Red Planet’s southern polar ice cap.

Making waves: The researchers spotted the lake using an instrument on the ESA’s Mars Express spacecraft, the Mars Advanced Radar for Subsurface and Ionosphere Sounding, or MARSIS, which pings radio waves at the planet. These penetrate its surface but bounce back when they hit a boundary between different materials, such as ice and bedrock. The reflection from a boundary involving liquid water is particularly strong. (In the image above, which shows the radiogram juxtaposed with an image of Mars, the water reflections are picked out as blue false color.)

Between March 2012 and December 2015, the researchers got 29 sets of radar readings from Mars’s Planum Australe, the southern polar plain. These showed a radar profile similar to those of subglacial lakes in Antarctica and Greenland.

A dose of salts: Mars is cold, so how come water under the ice cap isn’t frozen? The scientists say it’s because plenty of magnesium, calcium, and other salts from Martian rocks are dissolved in it, forming a brine. Along with pressure from the overlying ice, the salts lower the water’s freezing point. (Try the experiment with your kids!)

A dose of realism: Liquid water in large quantities could be a real boon to any future Martian colonists. But drilling for it and desalinating it would mean flying a lot of heavy equipment to Mars, and early settlers will probably land near the equator, not the poles. Their first source of water is more likely to be the ice sheets that have been found just below the surface at various spots around the planet’s midsection.