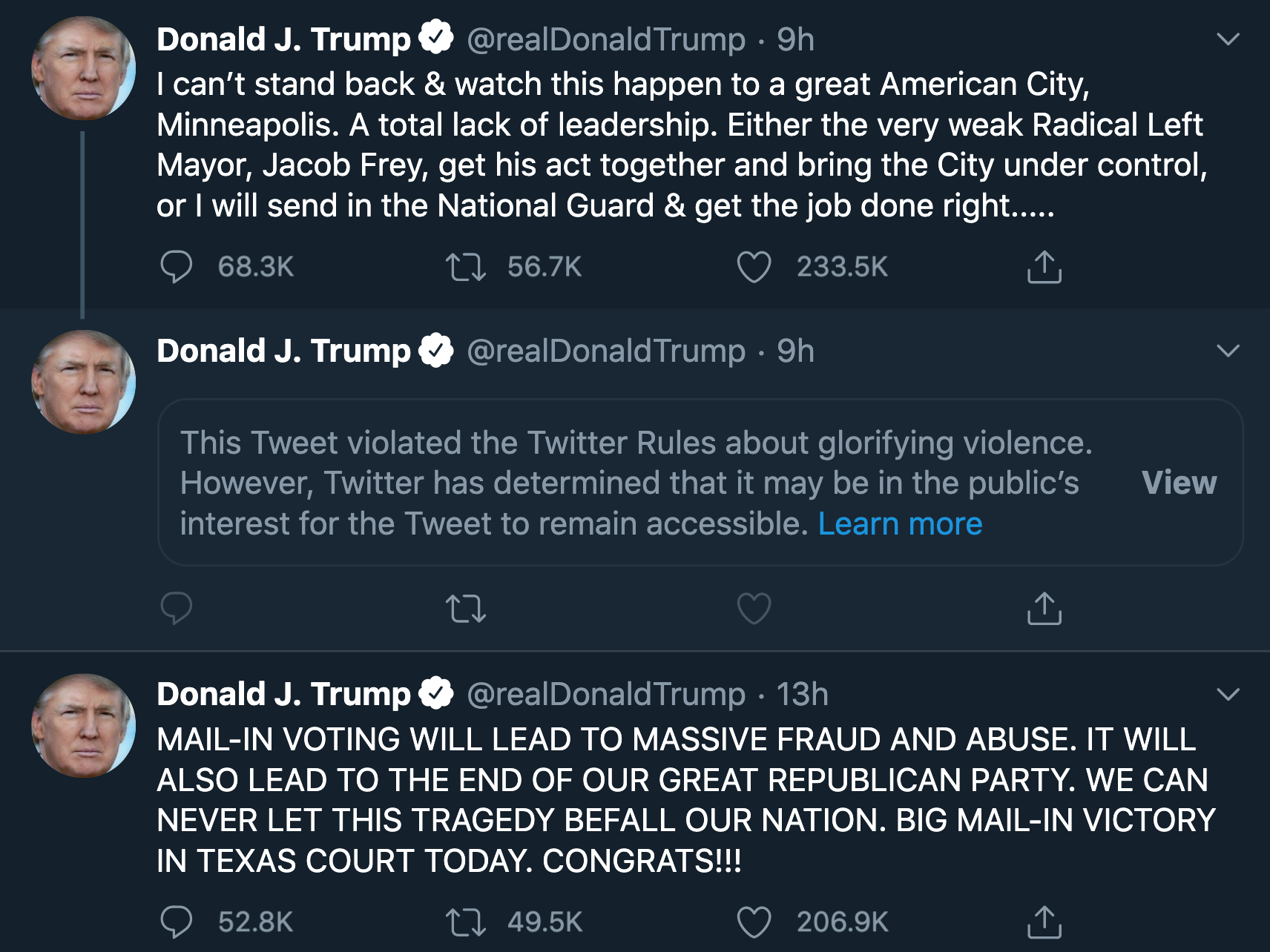 The news: Twitter placed a warning label on a tweet from US President Donald Trump early on May 29, saying that it violated the platform’s rules against “glorifying violence.” In the tweet, sent at 12:53 a.m., the president called Minneapolis protesters demonstrating against the death of a black man in police custody “THUGS,” threatened military intervention, and said that “When the looting starts, the shooting starts.”

Second time in a week: Twitter added a fact-checking label to two of Trump’s tweets about mail-in voting earlier this week, marking the first time the platform had enforced its rules about misinformation against the president. Yesterday, Trump responded by signing an executive order targeting the legal protections that keep social media companies from getting sued for the content on their platforms.

What the warning label does: While Trump’s tweets about voting are still freely visible on the platform, Twitter used a different approach to his overnight tweet. To see the tweet itself, users must first click past a label warning that it violates Twitter’s rules against glorifying violence. And users can’t reply to or like the tweet. Twitter has a “public interest exception” for rule-breaking tweets from large accounts run by government officials that, the company believes, should not be removed from the platform because of their newsworthiness.

“When the looting starts, the shooting starts.” Twitter said in a thread from its comms account that the warning label was added to Trump’s tweet because of “the historical context of the last line, its connection to violence, and the risk it could inspire similar actions today.” In 1967, Miami police chief Walter E. Headley used the phrase while promoting his policing tactics against “young hoodlums,” angering civil rights leaders. In the same interview, Headley also said, “We don’t mind being accused of police brutality ... they haven’t seen anything yet.”

How Trump responded: The president has already claimed that he is being censored by Twitter because he is conservative, and that the government should restrict or eliminate Section 230 of the Communications Decency Act, a 1996 federal law that gives internet companies a great deal of legal protection from decisions about user content and moderation. Hours after Twitter took action against his Minneapolis tweet, the official White House Twitter account reposted his comments verbatim. Twitter then added a warning label to that tweet as well.