Today's customers expect to have a fully satisfying experience every time they interact with a company. But the nature of those interactions has changed dramatically over the past decade. The proliferation of mobile devices, the expansion of e-commerce, and the initial implementations of the Internet of Things all have created an environment where customer contact is more frequent and more varied than ever before.

CUSTOMER DATA IS COMING FROM EVERYWHERE

Providing the kind of amazing customer experience that results in long-term loyalty is making companies completely rethink their approach to data capture and management.

Forward-thinking organizations are realizing that they must have a reliable way to treat data in an agile, responsive, and scalable manner.

When asked why, IT executives responded:

The Challenges of Legacy Technologies

Traditional SQL databases can't handle today's data management needs. They were designed to do one thing — manage high-volume business transactions. And they do that quite well. But they lack the ability to scale to handle the huge volumes of data today's customer interactions generate. And the architectural constraints of a single monolithic database make adding additional information categories on demand nearly impossible. 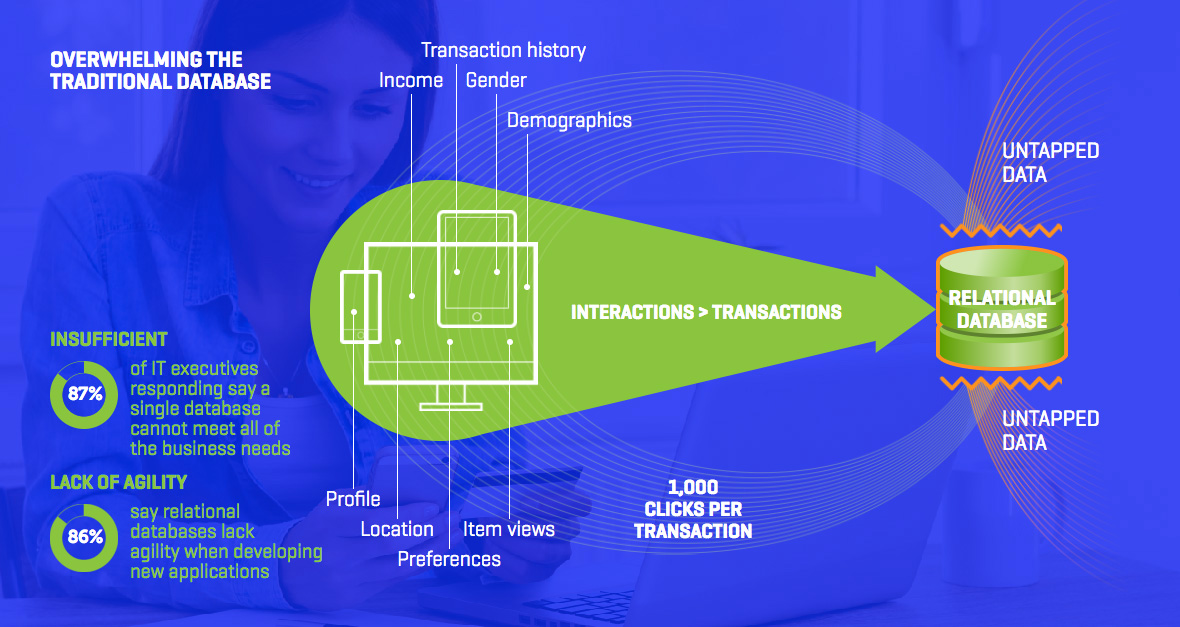 As a result, many companies are turning to a new kind of database designed expressly for these new demands of customer engagement — an Engagement Database. An Engagement Database can revolutionize an organization's ability to capture, learn from, and use data from customer interactions to deliver more satisfying and productive customer experiences.

Engagement Databases dynamically capture and respond to every click, every view, every trace of a customer's interaction with an organization — whether originating on the web, via mobile device, or a connected product on the IoT. 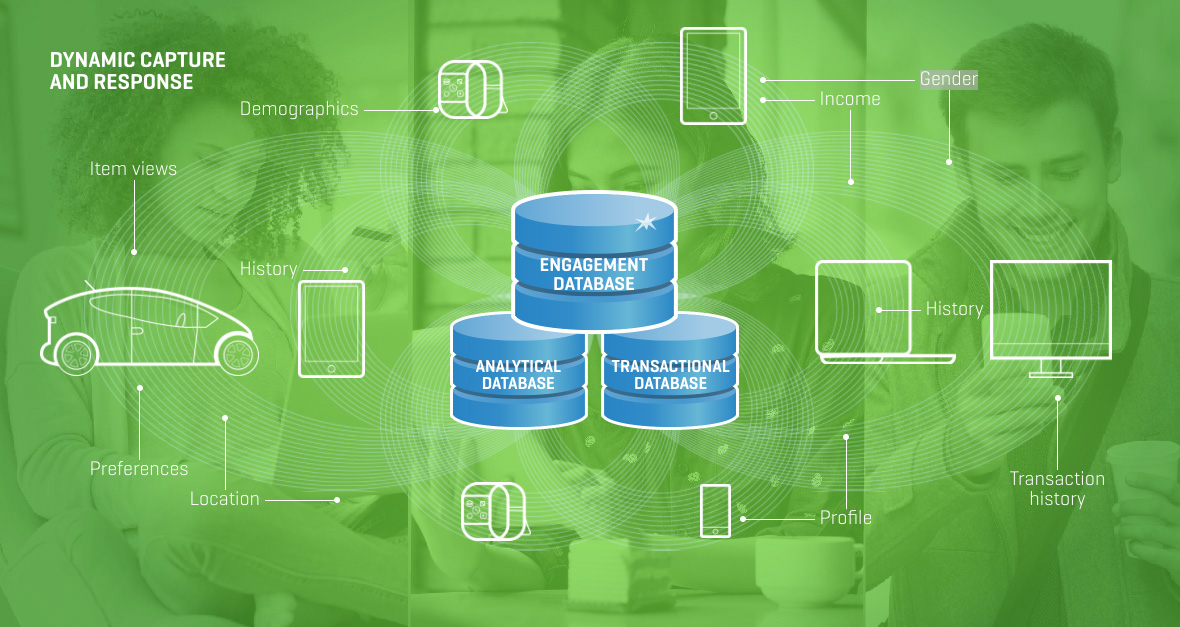 Incorporating powerful NoSQL technology and built on a distributed platform, an Engagement Database is built to run on commodity hardware. It can expand as required.

Individual database instances are handled separately, so resources are never overtaxed — it doesn't require a one-for-one linear expansion of server size to store more (or different) data. Thus costs to scale (even exponentially) are relatively low, and newly discovered data categories can be easily incorporated without a reduction in performance. 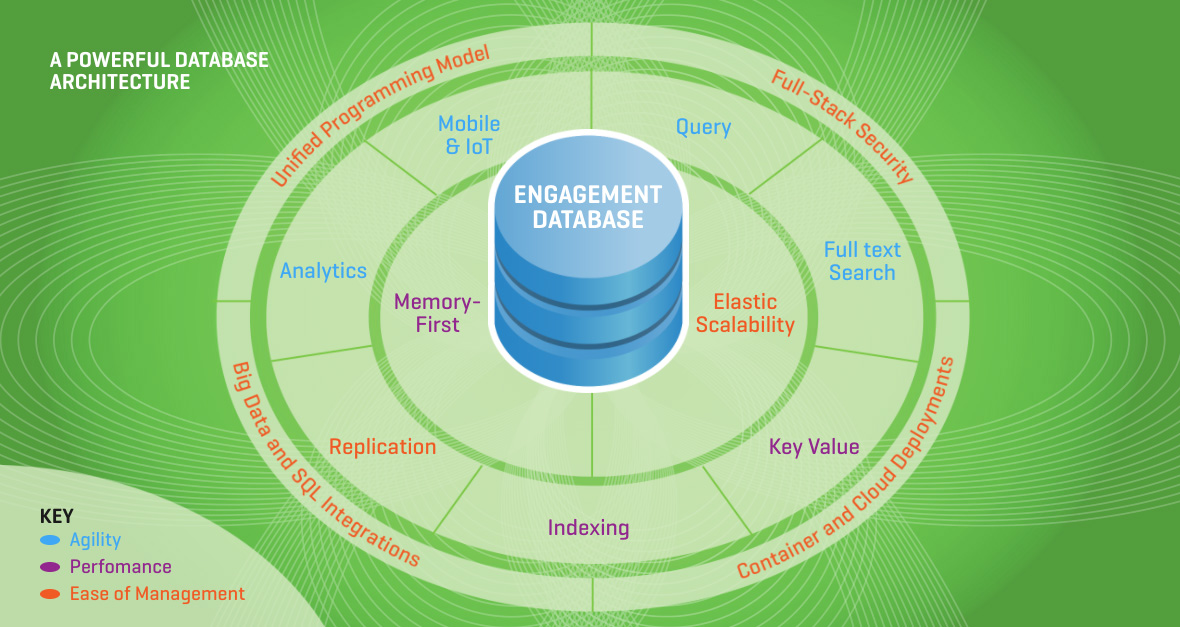 The Benefits of an Engagement Database

Gain the best of both worlds

Couchbase has been working with major enterprises across many industries to develop the new tools they need to deliver these revolutionary best-of-breed customer experiences.

"If you look at the way the transactional databases have been built, they were not optimized for these engagements. But it's these engagements that are the heart of this digital transformation," Couchbase CEO, Matt Cain says. "That's why we're so excited about what we're doing at Couchbase, because we have the world's only enterprise-grade data platform for digital transformation focused on customer engagement."

HOW SOME INDUSTRY LEADERS ARE PUTTING ENGAGEMENT DATABASES TO WORK

To enable the real-time dashboards, reports, notifications, alerts, and other capabilities its customers require, Verizon needs a highly available environment that never goes down. Verizon also has to scale the solution to support the exponential growth of IoT devices in the system, along with the unique data and reporting required for each customer. Verizon's legacy RDBMS simply couldn't meet the challenge—its response times were slow and unpredictable, stored procedure optimization was overly complex, and time-to-market for new features was too long. 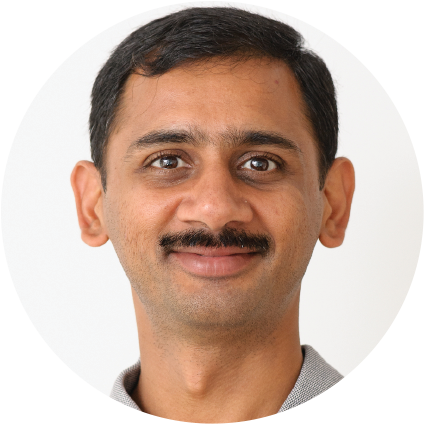 Today, there are six billion IoT connected devices, with 20 billion predicted by 2020. This magnitude of devices and data requires technology that meets these scale and responsivity needs. Couchbase gives us the enterprise-grade stability, predictable performance, scalability and flexibility necessary to gain real-time actionable insights into the millions of devices our IoT platform supports.

Today's travel industry is experiencing rapid growth, high customer expectations, fierce competition, and pressure on margins. Amadeus, the leading Global Distribution System (GDS) and the largest processor of travel bookings in the world, looked to NoSQL and Couchbase—shifting away from Oracle—to meet stringent data management needs within a demanding industry.

In 2008, Amadeus implemented Memcached on a MySQL database. By 2013, Amadeus leveraged Couchbase Server for two applications: Amadeus Selling Platform Connect, a website for professional travel agents such as Thomson and Expedia, and the global booking engine, Availability Processing Engine. The company made the complete shift to Couchbase in 2014 and had 800 million passengers travel with flights arranged by Amadeus in 2015.

By adopting NoSQL, Amadeus was able to maintain its key/value store architecture, while pushing the complexity of data distribution down into the database level. Today, Amadeus uses Couchbase in seven applications which are able to process petabytes of data in upwards of 2.5 million operations per second. 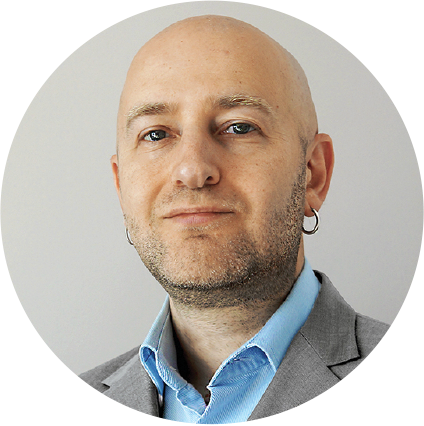 At Amadeus, our booking platforms process nearly 500 billion travel-related data requests per day. We work with Couchbase to help support these services and keep the travel industry moving.

As the world's largest online professional network, LinkedIn has to monitor and analyze massive amounts of data to ensure its site is available 24/7 for its 500+ million members. As its user base skyrocketed, LinkedIn quickly outgrew the limited flexibility and scalability of Oracle and turned to Memcached to run its source of truth (SoT) store. But Memcached had its own drawbacks, so LinkedIn continued looking at alternatives, including Couchbase, MongoDB, and Redis.

Couchbase was the clear winner due to many distinct advantages. Most importantly, it has built-in replication and cluster expansion, automatic partitioning, extremely low latency, it does asynchronous writes to disk, and it enabled simple replacement of Memcached. Because Couchbase was so easy to use, LinkedIn's site reliability engineers love it, and quickly expanded its use cases to include simple read-through cache, counter stores, de-duping stores, and their SoT store.

Within four years, Couchbase grew from a single proof of concept to the number one caching solution within LinkedIn. Today, all in-memory storage in the LinkedIn datacenter is done by Couchbase, and it powers 10+ million queries per second across all servers and clusters. 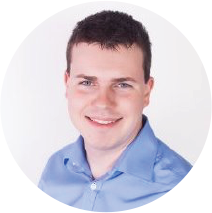 We run Couchbase at our corporate, staging and production environments at LinkedIn. So, any in-memory storage is done in Couchbase.