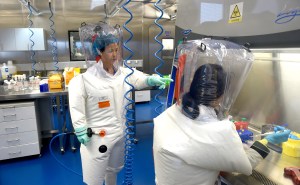 FILE – In this Thursday, Feb. 23, 2017 file photo, Shi Zhengli works with other researchers in a lab at the Wuhan Institute of Virology in Wuhan in central China’s Hubei province. On Dec. 30, 2019, Wuhan health officials issued an internal notice warning of an unusual pneumonia, which leaked on social media. That evening, Shi, famous for having traced the SARS virus to a bat cave, was alerted to the new disease, according to an interview with Scientific American. Shi took the first train from a conference in Shanghai back to Wuhan. (Chinatopix via AP)