In an industrial park near the shore of Lake Erie, hard by the Buffalo River, the future of the solar power industry is under construction. SolarCity’s sprawling Buffalo factory, built and paid for by the state of New York, is nearing completion and will soon begin producing some of the most efficient solar panels available commercially. Capable of making 10,000 solar panels a day, or one gigawatt of solar capacity a year, it will be the largest solar manufacturing plant in North America and one of the biggest in the world.

When production begins, SolarCity, already the leading installer of residential solar panels in the United States, will become a vertically integrated manufacturer and provider—doing everything from making the solar cells to putting them on rooftops. At a time when conventional silicon-based solar panels from China have never been cheaper, investing in a new type of solar technology is a risky undertaking. However, the potential benefits are huge. The new factory, says SolarCity chief technology officer Peter Rive, could transform both SolarCity’s business, which has consistently lost money, and the economics of residential solar power.

Solar panels installed by SolarCity cost the company $2.84 per watt (including sales and marketing plus overhead, in addition to the cost of the hardware), down from $4.73 in 2012. The combination of the new, highly efficient panels, the volume of product coming out of the new factory, and a simplified manufacturing process is a big reason why the company expects its costs for residential solar to fall well below $2.50 per watt by the end of 2017, when the Buffalo facility reaches full production.

Bolstered by federal solar subsidies and “net metering,” the rules that allow homeowners to sell excess power back to the grid at retail prices in many states, SolarCity is already leading the way in making residential systems financially attractive to many households, spurring an explosion in the popularity of the rooftop panels. The drop in installed costs could make residential solar even more popular.

“Right now we can sell you energy in 14 states at a rate lower than what you’re currently paying the utility,” says Rive. The Buffalo factory, he adds, “sets us up for a future where solar plus batteries is cheaper than fossil fuels.”

Key to the company’s ambitions is a technology it acquired when it bought a small solar company called Silevo in 2014. That technology, which allows it to make panels that are highly efficient at converting sunlight into electricity, traces its origins to the Australian solar power pioneer Martin Green in the late 1970s. It combines a standard crystalline-silicon solar cell with elements of a thin-film cell, along with a layer of a semiconductor oxide. Last October, SolarCity announced that test panels made at a small facility in Fremont, California, had tested at just over 22 percent efficiency. Today’s commodity silicon-based solar panels have efficiencies of between 16 and 18 percent. SolarCity competitor SunPower previously led the market with cells that can reach 21.5 percent.

Efficiency matters because the panels themselves represent only 15 to 20 percent of the cost of the full installation. Much of the rest comes in what’s known as balance-of-system costs: inverters to connect to the grid, materials to house the array, nuts and bolts to attach it to the roof, the labor to install it, and so on. SolarCity’s installation, says the company, will require one-third fewer panels to produce the same amount of electricity as conventional installations. “Fewer panels means fewer bits and pieces, less wire, less days on the roof to install,” says Francis O’Sullivan, the director of research and analysis at the MIT Energy Initiative.

SolarCity uses a deposition manufacturing process that reduces the number of steps required to make the cells from two dozen or more to just six. It also replaces silver, one of the most expensive elements of conventional solar cells, with less expensive copper.

But the difference in performance between solar panels produced in a small facility like SolarCity’s Fremont plant and in a large factory like the Buffalo one could be significant. And scaling up production could be particularly tricky given -SolarCity’s lack of manufacturing experience. Rive acknowledges that there could be “small risks around the actual time line” in getting the products coming out of Buffalo to match the efficiencies achieved at small scale. Already, SolarCity has pushed back the target date for full production from the Buffalo factory from the first quarter of 2017 to later in the year. 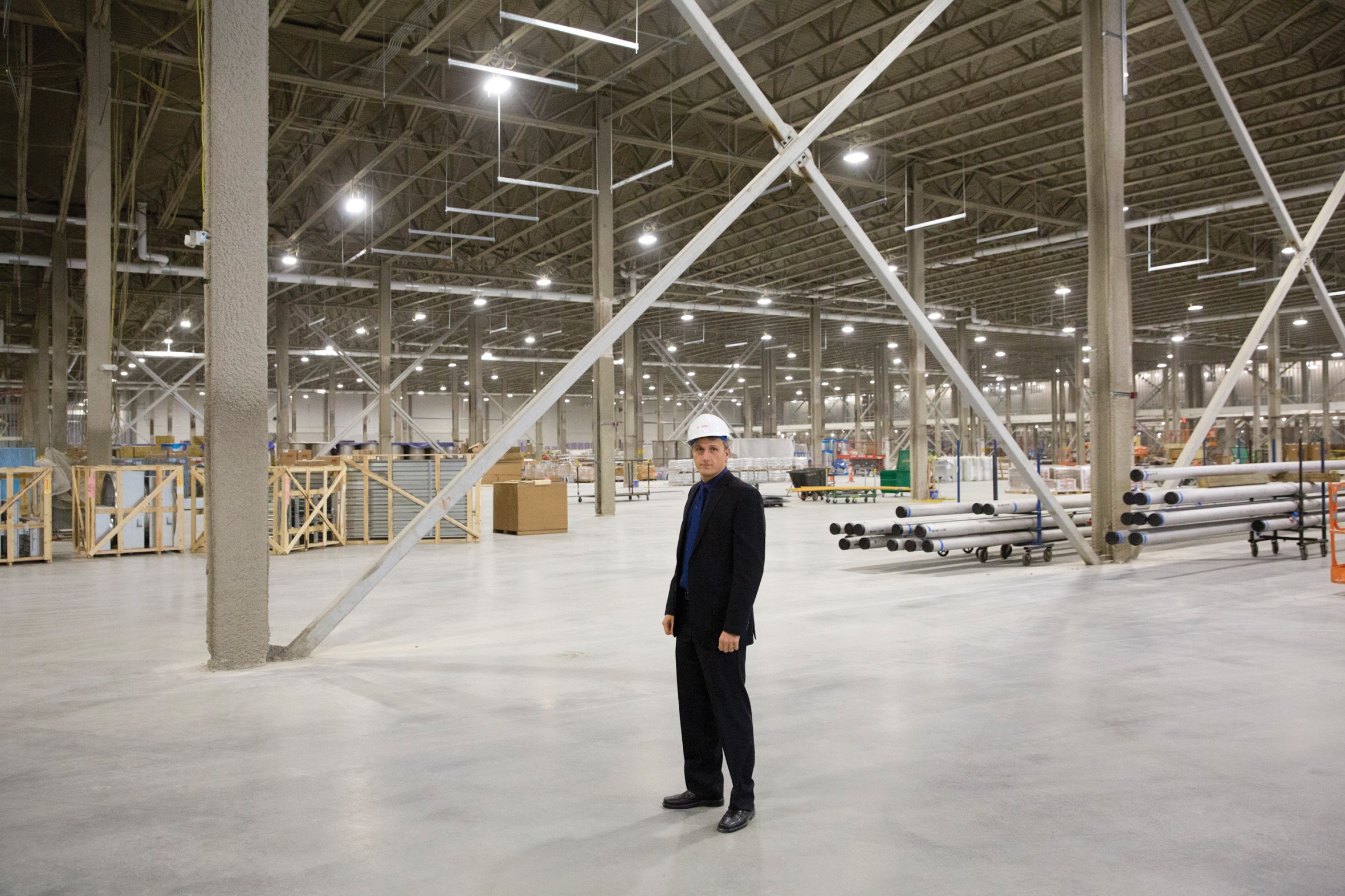 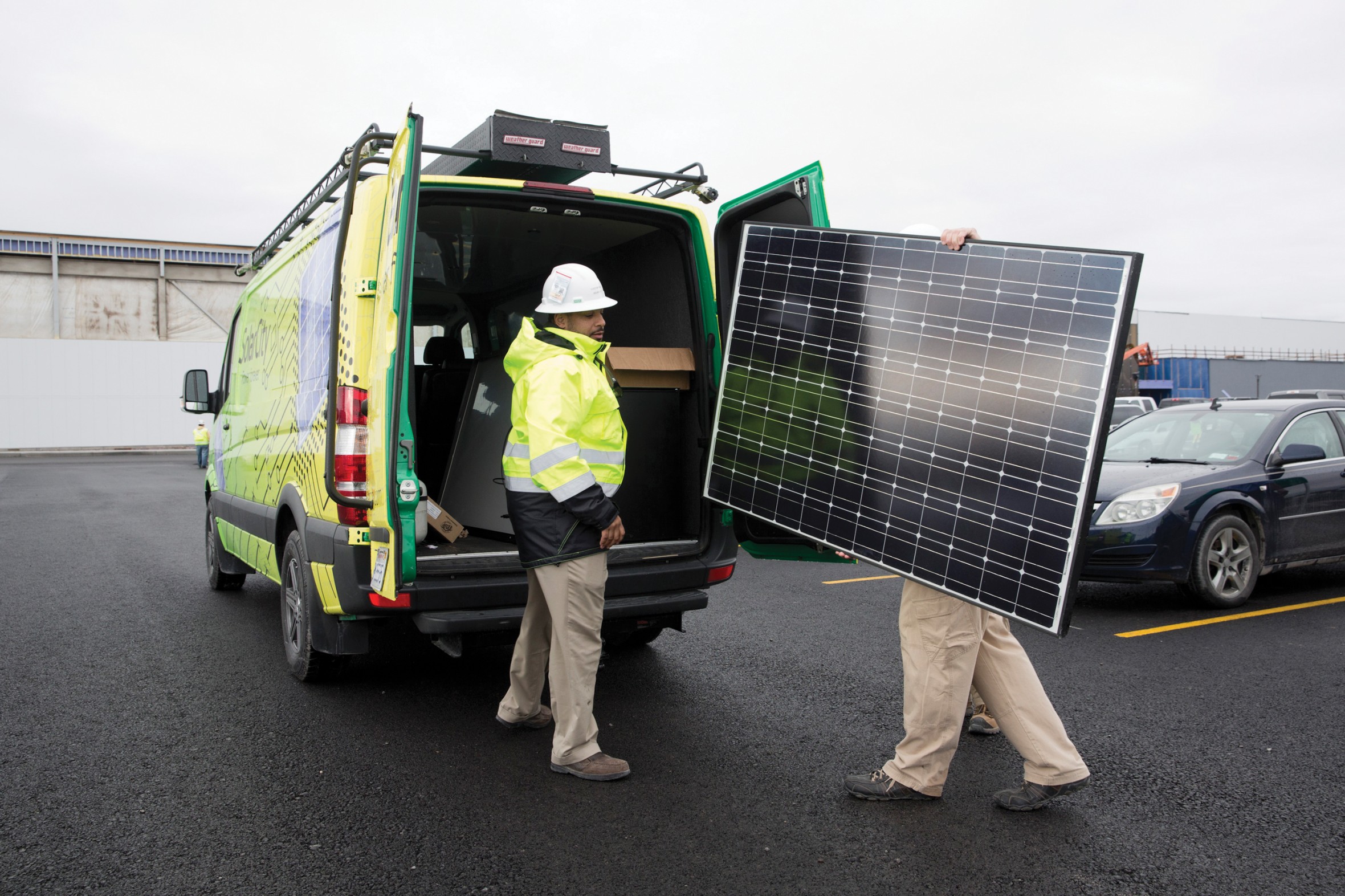 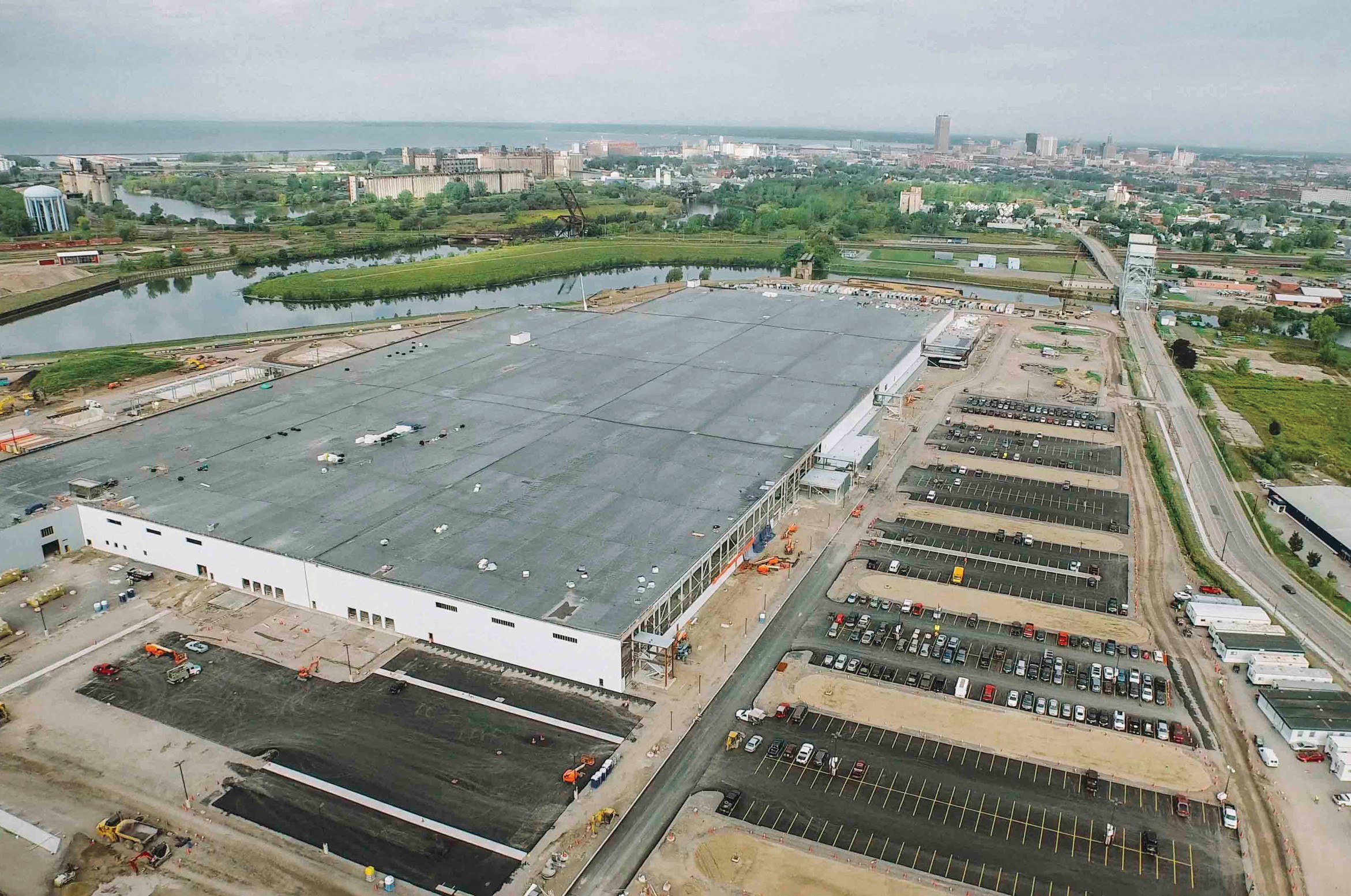 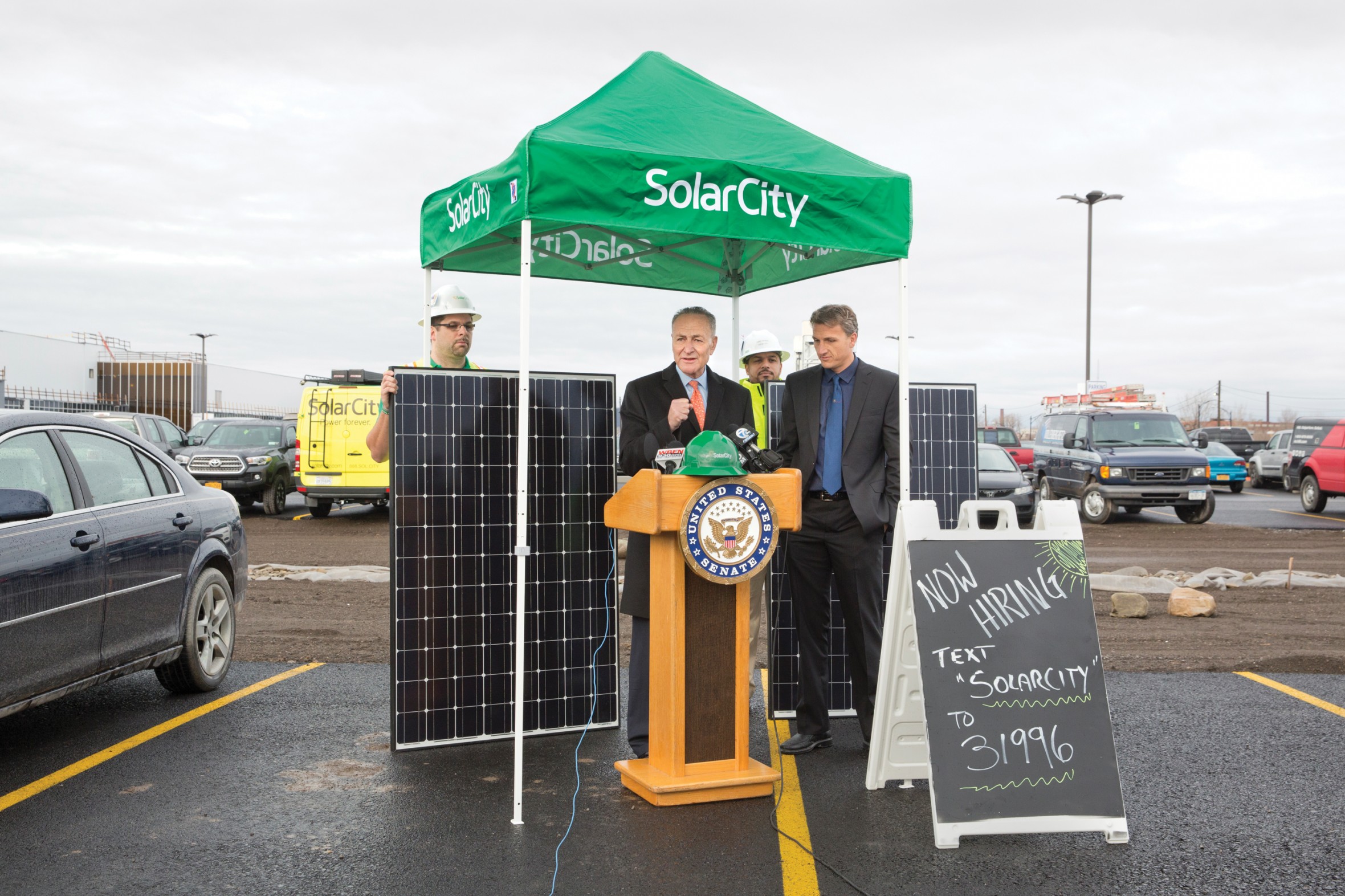 GUS POWELLSenator Charles Schumer speaks alongside CEO Rive at the Buffalo facility a key part of New York’s effort to revitalize manufacturing in the city.
1of4

But the real risk lies in the rapid advance of solar technology: a record-setting panel today might look relatively inefficient three or five years down the road. Soon after SolarCity showed off its high-efficiency panels last October, Panasonic topped its rival by claiming that its new panels would reach efficiencies of 22.5 percent. Meanwhile, efficiencies in the lab are even higher: researchers have made exotic solar-cell materials with efficiencies of up to 40 percent. “I think that within 10 years, most manufacturers will be producing panels over 20 percent efficiency, with the best commercial panels reaching over 23 percent,” Green says.

O’Sullivan adds: “For now, SolarCity is moving the boat out as far as it can with, generically speaking, contemporary technology. But we’re beginning to approach a choke point for the economics of any silicon-based technology”—including the new cells SolarCity is bringing online. Future advances, he says, will entail much lighter, flexible panels that offer much higher efficiencies and are even cheaper to install—and thus produce electricity at a much lower cost.

At that point, the solar panels coming out of the gigafactory may seem as conventional as commodity panels produced in China today. It is, however, SolarCity’s willingness to take on such risks that makes the Buffalo facility so ambitious. Over the last 10 years, the Silicon Valley company has made residential solar a popular choice for many consumers through smart marketing and attractive financing. Now it wants to transform solar manufacturing. Whether SolarCity succeeds or fails, it is once again pushing the possibilities of solar power.