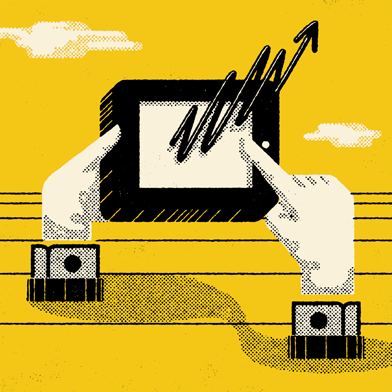 The CEO of a solar startup hopes you never see his product.

Miles Barr shows me into a hot and sunny conference room. He opens a metal case and reveals neat rows of e-readers, smartphones, and tablets.

Barr hands me two of the phones, each displaying the same colorful picture of a tree, and says one of them is getting electricity from a solar panel on its screen. I squint at them, trying to tell them apart, but I can’t. The same holds for device after device in his case. Even indoors, his e-reader, which requires much less power than the phones, is getting enough energy from the see-through photovoltaic coating to make plugging it in totally unnecessary.

The see-through panels aren’t yet on the market, but it’s easy to tell that they’d be a hit. Although you can already buy phones with solar cells on the back, they generate power only if you leave them face down. These transparent solar cells work as you use the device normally.

Barr’s solar cells can’t be seen because they are made of dye-like molecules that absorb wavelengths of light humans can’t see, letting visible light pass right through. In 2011, he cofounded a company called Ubiquitous Energy to develop the technology, starting with solar cells that could still be seen faintly on the screen. Since then, the startup has gotten them effectively invisible and made them efficient enough for low-power applications like e-readers and watches. Now it is trying to improve the reliability of the manufacturing process so the coatings can be integrated into existing assembly lines for electronic devices.

Barr pairs his inventiveness with a flair for salesmanship. In grad school he showed off solar cells printed on paper by folding the sheet into a paper airplane and attaching electrical leads to demonstrate that it could generate electricity. His demos have helped raise $8 million for Ubiquitous Energy, which recently left the Cambridge Innovation Center near MIT to set up shop in Silicon Valley.

Barr thinks he can go well beyond powering portable electronics. In his demonstration he holds up two sheets of window glass, one equipped with his invisible solar cells. By absorbing infrared and ultraviolet light, windows with this technology could help keep a room cool and generate power.