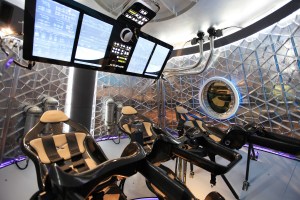 HAWTHORNE, Calif. – The Dragon V2 spacecraft’s seating arrangement with the control panel swung up to allow crewmembers to get into their seats. Once the crew is in place, the control panel swings down and locks in launch position. SpaceX unveiled the new spacecraft during a ceremony at its headquarters in Hawthorne, Calif. The Dragon V2 is designed to carry people into Earth’s orbit and was developed in partnership with NASA’s Commercial Crew Program under the Commercial Crew Integrated Capability agreement. SpaceX is one of NASA’s commercial partners working to develop a new generation of U.S. spacecraft and rockets capable of transporting humans to and from Earth’s orbit from American soil. Ultimately, NASA intends to use such commercial systems to fly U.S. astronauts to and from the International Space Station. Photo credit: NASA/Dimitri Gerondidakis