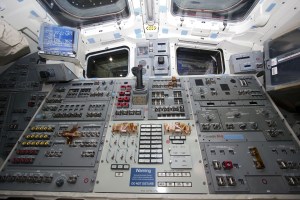 CAPE CANAVERAL, Fla. – In Orbiter Processing Facility-2 at NASA’s Kennedy Space Center in Florida, the controller used during docking to the airlock of space shuttle Atlantis stands among the switches filling the control panel on the flight deck. The flight deck is illuminated one last time as preparations are made for the shuttle’s final power down during Space Shuttle Program transition and retirement activities. Atlantis is being prepared for public display in 2013 at the Kennedy Space Center Visitor Complex. For more information, visit http://www.nasa.gov/shuttle. Photo credit: NASA/Jim Grossmann