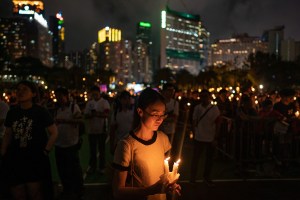 HONG KONG, HONG KONG – JUNE 04: People hold candles as they take part in a candlelight vigil at Victoria Park on June 4, 2019 in Hong Kong, China. As many as 180,000 people were expected to attend a candlelight vigil in Hong Kong on Tuesday on the 30th anniversary of the Tiananmen Square massacre. Commemorations took place in cities around the world on June 4 to remember those who died when Chinese troops cracked down on pro-democracy protesters. Thirty years ago, the People’s Liberation Army opened fire and killed from hundreds to thousands of protesters in Beijing after hundreds of thousands of students and workers gathered in Tiananmen Square for weeks to call for greater political freedom. No-one knows for sure how many people were killed as China continues to censor any coverage or discussion of the event that takes place during the anniversary. (Photo by Anthony Kwan/Getty Images)