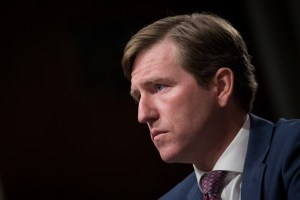 WASHINGTON, DC – OCTOBER 19: Christopher Krebs, senior official performing the duties of the under secretary for the National Protection and Programs Directorate in the Department of Homeland Security, testifies during a Senate Armed Services Committee hearing concerning the roles and responsibilities for defending the nation against cyber attacks, on Capitol Hill, October 19, 2017 in Washington, DC. Rob Joyce, the Trump administration’s cybersecurity coordinator and member of the National Security Council, was invited to testify but did not appear at the hearing. Committee chairman Sen. John McCain (R-AZ) accused the White House of blocking Joyce’s appearance before the committee.