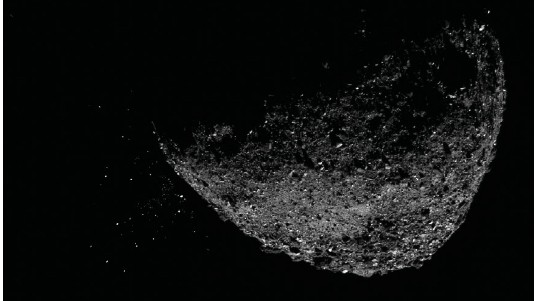 NASA’s OSIRIS-REx mission just took a picture of debris being ejected from the surface of asteroid Bennu. It’s the first time we’ve ever been able to directly image this kind of event, but scientists are so far stumped in determining why it happens.

What happened: The new finding, published in Science today, shows the detection of three different ejection events from early 2019. Each resulted in hundreds of centimeter-size particles being thrown off its surface. Some were thrust into space, while others stayed in Bennu’s orbit and eventually landed back on the surface.

Bennu can now be classified as an “active” asteroid, meaning it loses mass. Scientists have narrowed the causes down to three possible mechanisms: cracking caused by drastic temperature changes (for Bennu the temperature fluctuates between 126.85 and -23.15 °C every 4.3 hours), the dehydration of clay minerals, and the impact of micrometeorites on the asteroid’s surface.

Quite the surprise: Scientists had no idea Bennu could eject debris. The activity needed to launch these particles is “about the same energy you need to break a cracker,” says study coauthor Humberto Campins of the University of Central Florida and a member of the OSIRIS-REx team. It registers too low for our ground- and space-based instruments to detect. OSIRIS-REx was only able to detect it because it’s close enough to Bennu.

What it means for future missions: Objects like Bennu are very attractive for exploration, since they’re rich in organic molecules, and in water that could be mined. So it stands to reason that other asteroids we want to explore that share Bennu’s composition might end up being active as well, creating a new safety concern for these kinds of missions.

The observed activity on Bennu is not hazardous to the OSIRIS-REx mission, but it’s unclear if there might be periods of higher activity we haven’t seen yet. Bennu, and other asteroids like it, might go through periods where they spew up particles sizes and amounts that threaten the safety of most spacecraft.

What’s next: OSIRIS-REx will continue to survey Bennu, and eventually attempt to collect samples from the surface. It will then make its way back to Earth and deliver those samples back to Earth in September 2023.