This is the first global map of Saturn’s moon Titan 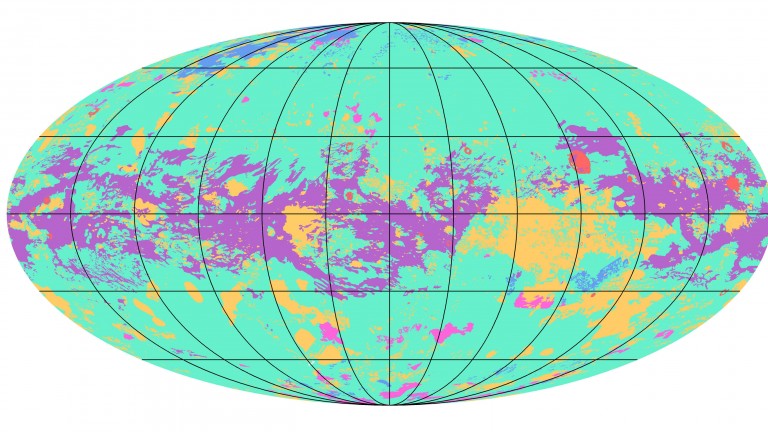 Old data acquired by NASA’s Cassini mission has given us our most complete look yet at the mysterious moon. The new map, in Nature Astronomy, offers new insights into how the moon’s methane cycle has shaped the surface.

How they did it: During Cassini’s orbit of Saturn from 2004 to 2017, the spacecraft made more than 100 flybys of Titan. Its incredibly thick atmosphere has always obscured most attempts to directly observe the surface. The map instead relies heavily on data collected by Cassini’s radar instrument, which could penetrate through the orange haze and glimpse the surface below.

What the map shows: Scientists have known for quite some time that Titan possesses lakes of liquid methane on the surface. The new map demonstrates that most of these lakes, which make up only about 1.5% of Titan’s surface, are located at the poles. Most of the lakes are located at the north pole, and the research team believes this might be an effect of Saturn’s elliptical orbit around the sun, which lengthens the summer in the northern hemisphere and draws out the rainy season for longer, creating more lakes.

The new map also gives us more information about what Titan looks like on the surface. The vast majority is covered by flat plains at the mid-latitudes and dry, sandy dune fields at the equator. Around 14% of its surface is dominated by extremely old hills and mountains, while valleys that have been shaped by rain and erosion at the hands of the methane cycle cover 1.5% of the surface.

What it means: The presence of methane is of great interest to scientists who believe Titan might be home to biological life of some kind (metabolic processes could have evolved to replace oxygen with methane). NASA is preparing a new mission to Titan, called Dragonfly, that will deploy a drone to the surface in 2034 to study multiple locations. While the mission is set to initially explore a region of the moon just north of the equator, it’s conceivable this new map might persuade NASA to first explore one of the lakes more closely instead.