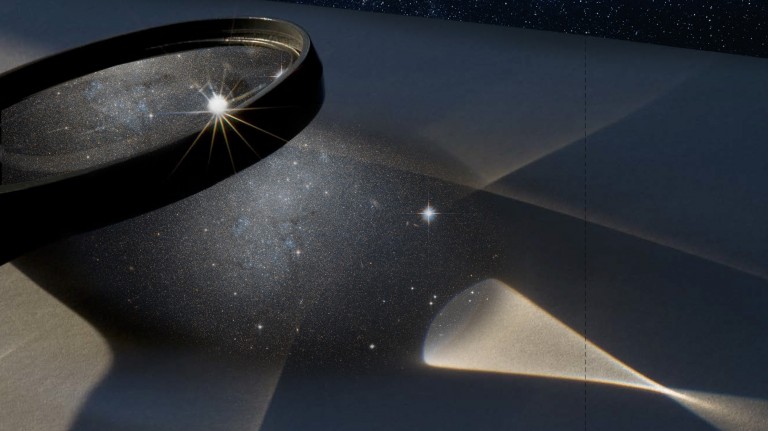 Astronomers have spotted a toddler dwarf galaxy 9.4 billion light-years away by turning a cluster of other galaxies into a magnifying glass for x-rays, according to a new paper published in Nature Astronomy

What is it: The dwarf galaxy is one 10,000th the size of the Milky Way itself, yet it is brimming with activity. It is currently going through a phase of intense new star formation, resulting in high-energy x-rays pulsing through the region. This is the first time scientists have ever been able to watch this sort of galaxy life stage with x-ray observations.

How did they do it? Galaxy clusters induce gravitational effects on surrounding matter and energy by bending and magnifying it as a glass of water might with a beam of light. This is called gravitational lensing, and scientists can use this phenomenon to study and determine where different electromagnetic signals hailing from other parts of the universe originate from.

Gravitational lensing has never before been used to study x-ray emissions, but the principles apply just the same as they would for light. The team used NASA’s Chandra X-ray Observatory to study the Phoenix cluster, 5.7 billion light-years away—a structure that’s a quadrillion times more massive than the sun. It’s a perfect natural lens to magnify x-ray emissions as they pass through.

After subtracting for x-rays coming from the Phoenix cluster itself, the team found “lensed” emissions magnified 60 times over, coming from a dwarf galaxy 9.4 billion light-years away, born when the universe was a third its current age.

So what? What exactly happened in the first 5 billion years of the universe is still pretty murky. The authors of the study say the new detection shows it’s possible to use natural x-ray magnifiers to identify things that were born soon after the Big Bang. Tools like Chandra could now be used to comb over other aspects of the ancient universe and solve cosmological questions in far greater detail.