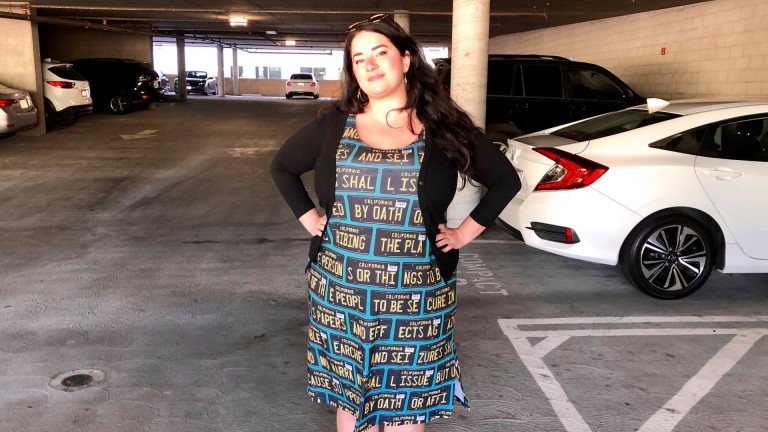 Garments from Adversarial Fashion feed junk data into surveillance cameras, in an effort to make their databases less effective.

The news: Hacker and designer Kate Rose unveiled the new range of clothing at the DefCon cybersecurity conference in Las Vegas. In a talk, she explained the that hoodies, shirts, dresses, and skirts trigger automated license plate readers (ALPRs) to inject useless data into systems used to track civilians.

False tags: The license-plate-like designs on a garment are picked up and recorded as vehicles by readers, which frequently misclassify images like fences as license plates anyway, according to Rose (pictured above modeling one of her dresses). The idea is that feeding more junk data into the systems will make them less effective at tracking people and more expensive to deploy.

A surveillance splurge: There are tens of thousands of ALPRs dotted across the US, reading and recording thousands of license plates every minute, with more being added every day. They’re mostly controlled by police departments and government agencies, but private citizens can buy and operate them too. The readers detect and then photograph a vehicle’s plates and record the time, data, and location, and an algorithm checks the data against a database of cars the police are looking for. They’ve caused consternation among privacy advocates, who say they enable a legally questionable form of mass surveillance.

Fashion fights back: Though it’s the first to target ALPRs, this isn’t the first fashion project aimed at fighting back against surveillance. Researchers have come up with adversarial images on clothing aimed at bamboozling AI, makeup that lets you hide your face from recognition systems, and even a hat that can trick systems into thinking you’re Moby.