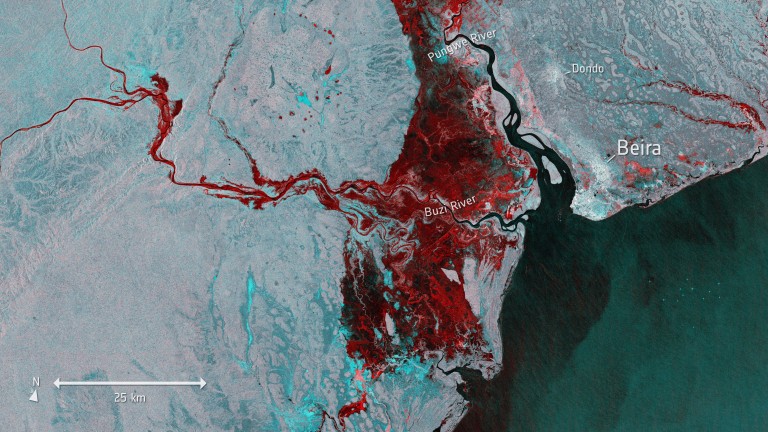 Cyclone Idai swept through southeast Africa a few days ago, killing thousands and leaving entire towns and farmlands under water. The aftermath is only just starting to become clear, with the help of drones and satellite imagery.

Mapping: Satellites are being used to map flooded areas to assist relief efforts. The image above is from the European Space Agency, but NASA is also helping to map the area. The ESA’s Sentinel-1 satellite is particularly useful thanks to a radar system that lets it see through clouds, rain, and dark. These images will help provide up-to-date information to understand exactly which areas have been affected. The American Red Cross is also using drones to see where aid is most needed.

What it shows: The area around the Buzi River is now effectively a vast inland lake, measuring 125 by 25 kilometers.

The extent of the damage: It’s estimated that well over two million people in Mozambique, Malawi, and Zimbabwe are affected, but the extent of the destruction is still not fully clear. It could be the Southern Hemisphere’s worst storm. The authorities are still working around the clock to try to rescue people, despite little access to roads, transport, or communication links.