We now know how much the Milky Way weighs 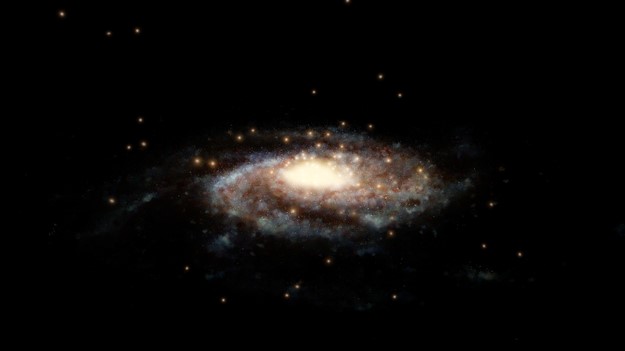 If you put our galaxy on a massive magic scale, it would weigh as much as about 1.5 trillion suns.

The Milky Weigh: That number includes dust, planets, stars, and even the massive black hole in the center of the Milky Way. But that’s less than half the total mass—the majority comes from dark matter. In a new trick, data from the European Space Agency’s Gaia mission was combined with observations from the NASA Hubble Space Telescope to allow indirect measurements of the dark matter’s mass.

Some background: Researchers have tried to estimate the weight of the Milky Way before, but figures ranged widely, from 500 billion to 3 trillion times the weight of our sun. “We just can’t detect dark matter directly,” explains European Southern Observatory researcher Laura Watkins, lead author of the study, to be published in an upcoming edition of the Astrophysical Journal. “That’s what leads to the present uncertainty in the Milky Way’s mass. You can’t measure accurately what you can’t see.”

How they did it: The team observed the velocities of globular clusters, which are clusters of stars that orbit the center of the galaxy. The faster the clusters move, the more massive the galaxy. Previous investigations used the speed of clusters relative to Earth to figure out the mass. But by using two sets of data, this study was able to include additional sideways motion in the velocity measurements, which yielded more accurate calculations.

Why it matters: Getting a better handle on the mass of our galaxy allows better comparisons with other galaxies in the universe—and helps more easily answer cosmological questions that require knowing the scale of the Milky Way. By better understanding the universe close by, we can better comprehend the galaxies a few more light-years away.

Want to keep up with space technology news? Sign up for our new space newsletter, The Airlock.