President Trump has signed a directive to establish Space Force 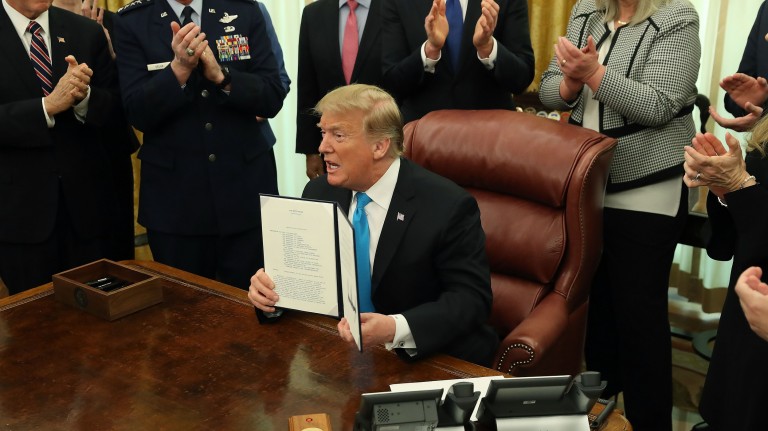 Rather than becoming its own new department, as the president originally announced, the directive the signed yesterday intends to make the Space Force a sixth branch of the military, overseen by the Air Force.

Some background: What the Space Force is, exactly, has been evolving since President Donald Trump made a surprise announcement directing the Pentagon to create it last June as a separate branch of the military. A few months later, Vice President Mike Pence called on Congress to allocate $8 billion to fund the Space Force and space security systems over the next five years. But creating a completely separate branch of the military overseen by the Pentagon requires a lot of steps, including legislation from Congress, so things were dialed back a bit.

What was signed: The directive calls on the secretary of defense to develop a legislative proposal to establish the structure and authority of the Space Force as the sixth branch of the US armed forces, overseen by the Air Force, similar to the way the Marines are overseen by the Navy. If also asks for a proposed budget for the US Space Force to be included in the president’s fiscal year 2020 budget request.

The proponents: While America’s military already is involved in space, launching satellites for things like surveillance and GPS, some argue that not enough attention is being paid, especially compared with countries like Russia and China. “Our adversaries, and whether we get along with them or not—they’re up in space,” Trump said during the signing. “And that’s going to be a very big part of where the defense of our nation—and you could say ‘offense’—but let’s just be nice about it and let’s say the defense of our nation is going to be.”

The critics: Those against it say it’s duplicating something we already have, US Space Command. They add that it could be very expensive and would lead to further militarization of space.

What’s next: Congress has to make a choice to actually act on this signed directive, as congressional approval is still required to create the new body. So expect debate coming soon, especially after more specific funding details are released in the 2020 budget request.