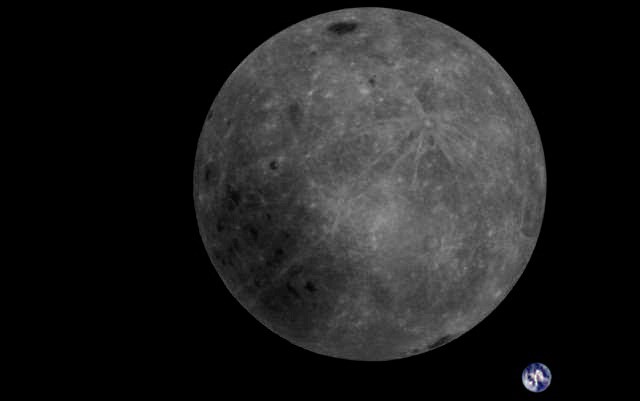 It provides a rare glimpse at the moon (with Earth peeking out behind) from the side we never get to see it.

The photographer: The photo was snapped by the Chinese lunar satellite DSLWP-B (Longjiang-2) on February 3 and downloaded by the Dwingeloo telescope, located in the Netherlands. The satellite, which has been in orbit since June 2018, took the photo after switching back on after a radio quiet period.

The quiet period had been imposed to avoid interfering with China’s Chang’e-4 landing on the moon’s far side. While the original image has a purple tint to it, the researchers color-corrected it to the image you see above.

A lunar focus: The Chinese Lunar Exploration Program began in 2004. Since then, the CNSA has launched two unmanned orbiting probes called Chang’e-1 and Chang’e-2, as well as the Chang’e-3 and Chang’e-4 lunar landers.

The Chang’e-3 rover was the first spacecraft to land on the moon since the Soviet Union’s sample return mission in 1976, but it didn’t move far. After two lunar days, it lost its roving abilities. The Chang’e-4 successfully landed on the moon last month.