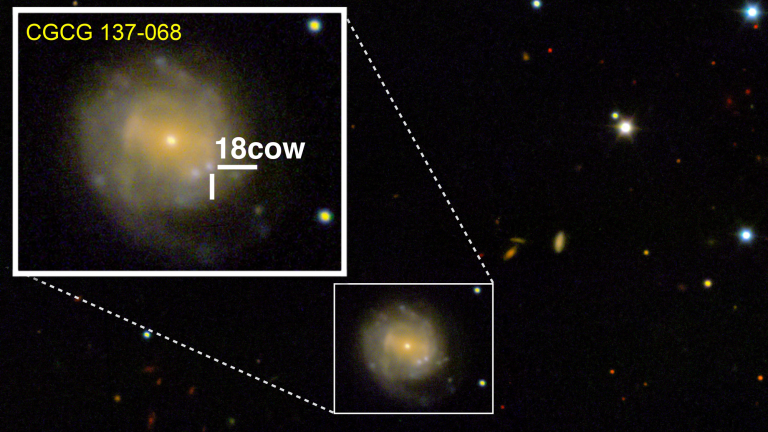 An unusually bright star collapse was caught through a telescope last year—now we might know what it was.

The mystery of the Cow: This past June, an extremely bright object in the sky created an astronomical mystery that was given the name AT2018cow (a.k.a. “the Cow”). The ATLAS survey’s Hawaii-based telescopes spotted a bright spot about 200 million light years away that quickly appeared, then disappeared a few days later. Researchers initially thought it might be a supernova, but it was 10 to 100 times brighter than the typical supernova, and blinked out of the sky much faster.

Solving the puzzle: As presented at the American Astronomical Society's conference today, researchers from Northwestern University now believe that the telescopes picked up the moment a star collapsed and turned into either a black hole or a neutron star.

Why could we see this one? Typically when stars collapse into black holes, the huge amount of material thrown out blocks Earth-based views of the event. But according to Raffaella Margutti of Northwestern, this star had about 10 times less material spewed out, allowing astronomers to see inside. “A ‘lightbulb’ was sitting deep inside the ejecta of the explosion,” Margutti says.

How they figured this out: Rather than using telescopes that capture visible light, the traditional method of studying star deaths, the team from Northwestern also used x-rays, "hard x-rays" (which are basically extra powerful x-rays), radio waves, and gamma rays to study the Cow. That allowed them to keep studying the phenomenon even after the bright spot had dimmed. With the first observations of the formation of a black hole or neutron star in hand, astronomers will be able to better understand what happens in the moments that a star dies, and a strange new object springs into being.