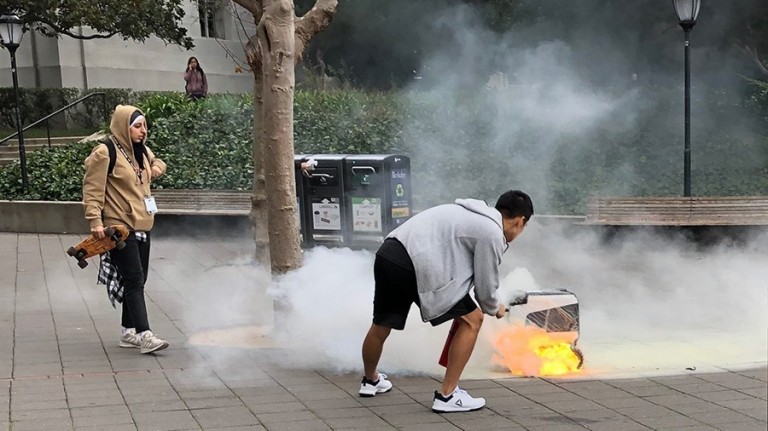 A food delivery robot caught fire on the campus of UC Berkeley on Friday, prompting an outpouring of grief online and leading students to set up a candlelit memorial to the “KiwiBot.”

What happened? The “KiwiBot,” one of over 100 robots that deliver food throughout Berkeley, suddenly burst into flames. The manufacturer blamed human error, saying someone had inserted a defective battery that had caused thermal runaway (the same issue that made Samsung’s Galaxy Note 7 phones catch fire in 2016). It promised that new software will monitor the batteries inside its bots, to avoid a repeat.

The response: Students took to the “Overheard at UC Berkeley” Facebook page to pay tribute, describing the robot as a “hero” and a “legend,” according to the student paper. The video of the smoldering bot had nearly 100 comments just an hour after it was uploaded. Some students called for a moment of silence, and others even went as far as to create a candlelit memorial.

Umm … It might sound ridiculous (finals week can get to the best of us). But it’s just another example of humans empathizing with robots. We’ve held funerals for them. There was genuine outrage when a Canadian hitchhiking robot called hitchBOT was decapitated in Philadelphia. People even claimed a robot had “committed suicide” last year when it fell into a fountain (in fact, its algorithm just failed to detect an uneven surface).  People were upset when Google released a video showing researchers kicking its robot dog. Some studies have found people are reluctant to “hurt” robots and that if we see one in “pain” it affects us in much the same way as if it were a human being.