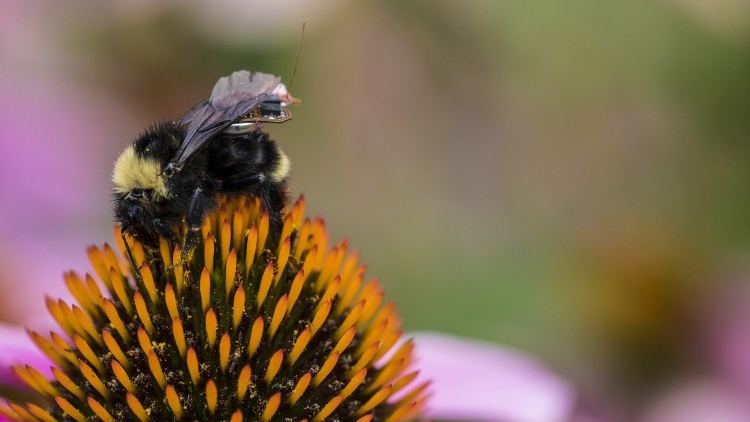 Roboticists often look to the natural world for inspiration. But what about piggybacking technology onto nature itself? Engineers have created a sensing system that effectively turns bumblebees into living drones.

The internet of bees: The University of Washington team glued removable mini “backpacks” onto bees. The packs, which include sensors that monitor temperature, humidity, and light intensity as well as tracking their location, weigh 102 milligrams each, roughly as much as seven grains of uncooked rice. They are powered by a small rechargeable battery that lasts for seven hours and charges wirelessly while the bees are in their hive at night. While in the hive, the backpack can upload its data using a method called backscatter, which lets devices share information by reflecting radio waves transmitted from a nearby antenna.

Down on the robo-farm: It sounds odd, but one day the idea could help farmers gain useful insights into their land and crops. It could also help us learn more about bees themselves, as part of efforts to reverse their global decline.

Bees vs. drones: Farmers already use drones to monitor their crops, for example. But bees offer some advantages over drones. They don’t need charging and so can collect data for the whole day, whereas drones can only fly for 10 or 20 minutes. “We showed for the first time that it’s possible to actually do all this computation and sensing using insects in lieu of drones,” said author Shyam Gollakota. However, bees can’t carry as much weight (the next step is to equip them with cameras, too), and their movements can’t be controlled.