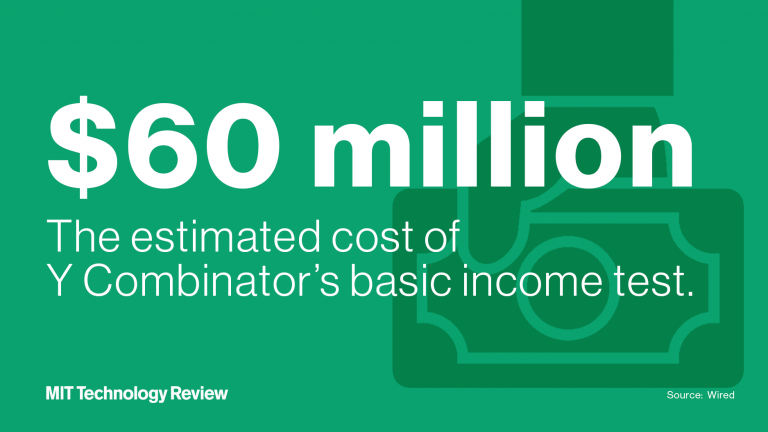 The tech incubator will finally begin its full-fledged basic-income test in 2019.

The news: Beginning in early to mid 2019,Y Combinator's Making Ends Meet program will provide unconditional cash transfers to 3,000 participants in two states. (The incubator is still deciding which states and will finalize the decision next month.) Y Combinator has signed a contract with Michigan’s Survey Research Center to conduct the study.

The logistics: The entire test has a lofty bill of $60 million, with 75 percent going directly to the participants. One thousand people will receive a $1,000-per-month stipend, while a control group of 2,000 people will get a monthly $50. There will be both a three- and a five- year test.

A learning process: The incubator’s Oakland test run took a lot longer than originally predicted. Its goal is now to have 30 to 40 people by the end of next month—much less than the initial target of 100 families.

The basic-income struggle: Two major tests in Canada and Finland that were launched with great fanfare will be ending prematurely. As Elizabeth Rhodes, YC Research’s project director, told Wired, “It’s harder to give away money than you might think.”

Why it matters: Basic income has become Silicon Valley’s favorite answer to the question of how society should deal with jobs being eliminated by automation. It’s even becoming a presidential campaign issue for 2020. Despite the test’s struggles, Y Combinator’s president, Sam Altman, still believes basic income is the solution.

This story first appeared in our future of work newsletter, Clocking In. Sign up here for free.