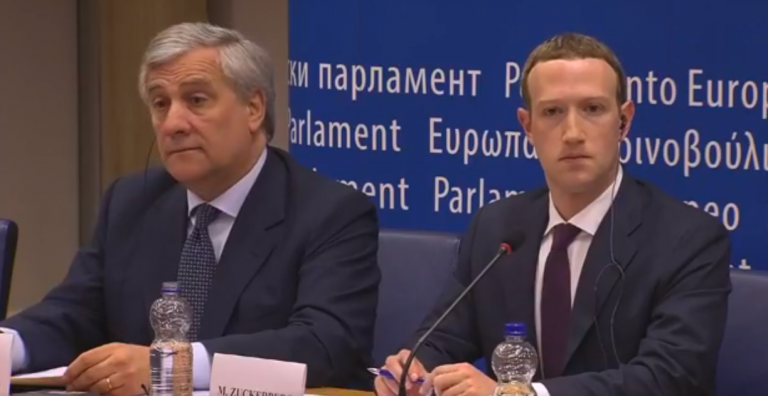 Spotlight on Zuck: He testified before the European Parliament. The policymakers wanted answers about the Cambridge Analytica data scandal—in which, lest we forget, the data broker gained access to 87 million Facebook users’ profiles. They also wanted to know how well-prepared the social network is to comply with the EU’s new privacy rules, known as GDPR, which go into effect on Friday.

What he said: As anticipated, Zuckerberg apologized (yet again), saying the company “didn’t take a broad enough view” of its responsibility and that “keeping people safe will always be more important than maximizing profits.” And he reiterated moves Facebook is making to keep users safe online.

He also said that Facebook is ready to follow GDPR, which includes rules like making companies get consent if they plan to use an EU resident’s personal data.

Big contrast: The European Parliament hearing follows two that took place in the US last month, when Zuckerberg faced Congress, spending a total of 10 hours talking about everything from user privacy to Facebook’s business model. Back then, he often answered lawmakers’ questions by saying his “team” would get back to them.

The format was a bit different this time around, though. Whereas US lawmakers were given a chunk of time to grill Zuckerberg however they liked, all the European Parliament lawmakers asked their questions at once, and then Zuckerberg responded.

This let him sum up their questions—“Several of you asked questions around inappropriate content on Facebook,” “There were a number of questions around elections”—and be more vague with his responses. He also sidestepped some, such as whether Facebook is such a monopoly that it needs to be broken up (he talked about competition, though, and how people use “a lot of different tools” for communication).

However: In response to questions about whether the data leakage related to Cambridge Analytica is just “the tip of the iceberg,” Zuckerberg said he expects Facebook will find other apps it wants to cut off from using its platform (so far it has knocked out more than 200).

Not so thrilled: Some European Parliament members were dismayed by Zuckerberg’s responses, or the lack thereof.

Once Zuckerberg finished summing up and offering responses, Parliament member Guy Verhofstadt complained he hadn’t answered his questions, saying, “Of course you asked for this format for a reason.”

Finish with a photo opp: Not everyone had a bone to pick with Facebook’s leader. On the live stream of the proceedings, one parliamentarian could be seen posing for a photo with Zuckerberg right after the questioning ended.