CRISPR: The Next Hearing-Loss Treatment? 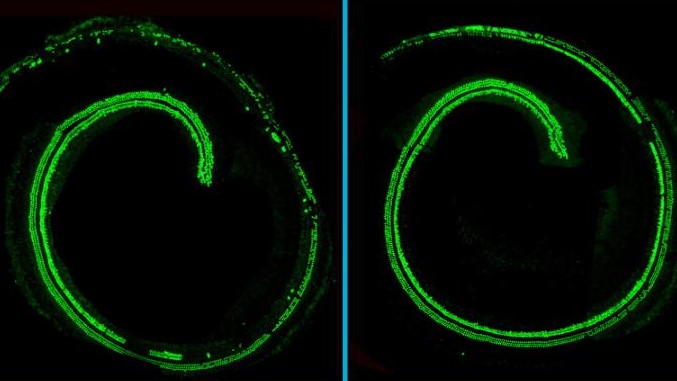 Scientists have used the gene-editing tool to restore hearing in animals with a genetic form of deafness.

The work, which is detailed Wednesday in the journal Nature, was done in mice, but a similar technique could eventually be used in humans. In mice, scientists injected CRISPR-Cas9 directly into the tiny hairs of the inner ear, which pick up the vibrations of sound waves and convert them into signals the brain can interpret (in the image above, a mouse’s cochlear hairs show up green).

When these hair cells are damaged—which can happen if you listen to too much loud music, for example—it leads to hearing loss. Mutations in certain genes have a similar effect.

In the Nature paper, researchers encapsulated the CRISPR system in tiny lipid bubbles to target the Tmc1 gene, which causes hair cells to produce an abnormal, toxic protein that builds up and kills cells. In both humans and mice, inheriting just one copy of the gene causes progressive hearing loss that leads to deafness. In people, numerous genes have been linked to hereditary deafness.

When injected into the cochlea, the spiral-shaped portion of the ear responsible for hearing, CRISPR was able to disrupt the deafness-causing gene. We previously explored why this might be a good way to deliver CRISPR into a person (see “The Easiest Place to Use CRISPR Might Be in Your Ear”).

In mice that received the CRISPR injection, more hair cells survived and grew back weeks later. To test their hearing, researchers placed electrodes on the animals’ heads and monitored the activity of brain regions involved in hearing. The untreated mice needed to be exposed to louder sounds to spark brain activity than the treated mice.