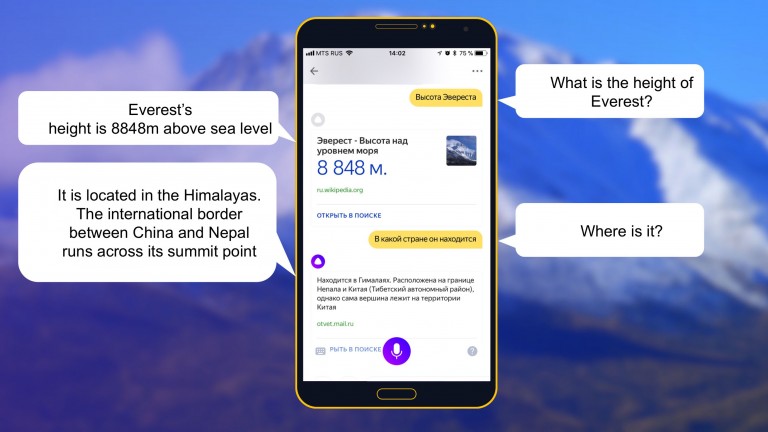 The unfailingly polite tone of personal assistants like Siri and Alexa isn’t to everyone’s taste. Many in Russia, in fact, seem to prefer their AI helpers with sass and a dark sense of humor.

The Moscow-based tech giant Yandex launched a Russian-speaking personal assistant called Alice this October (pictured above, sans snark). And unlike Siri or Alexa, the program relies less on scripted responses than on what it’s learned by consuming conversational data mined from the Web, news articles, and even a little Russian literature.

As a result, Alice can respond to a much wider range of queries. However, some of program’s responses can be a bit surprising. “It’s the first conversational assistant to do chit-chat,” Misha Bilenko, who is head of machine intelligence research at Yandex, told me during the Neural Information Processing Systems conference last week. “But it’s a bit politically incorrect and unsympathetic.”

Bilenko says, for example, that those who tell Alice “I am sad” are quite likely to hear “No-one said it was going to be easy” in response. He says the chatbot with attitude has proved a huge success, attracting 1.5 million daily users in Russia and become the focus of a spoof presidential campaign on social media. Bilenko admits that some answers had to be hand-coded in order to prevent the system from being too inappropriate.

Alice reminds me of the experimental neural network chatbot (PDF) created by Quoc Le and Oriol Vinyals at Google in 2015. This system was trained end-to-end on computer help-desk chat logs, and it could produce some remarkably good answers to questions, as well as many completely bizarre ones.

Alice, which is accessible through Yandex’s Web browser, also shows how different cultural attitudes toward AI tools are likely to shape the technology’s progress. And let’s be fair: if you spent a lot of time reading Russian literature, you might develop a gloomy sense of humor too.