Ethereum’s First Killer App Is Here, and It’s a Game Where You Create Digital Cats 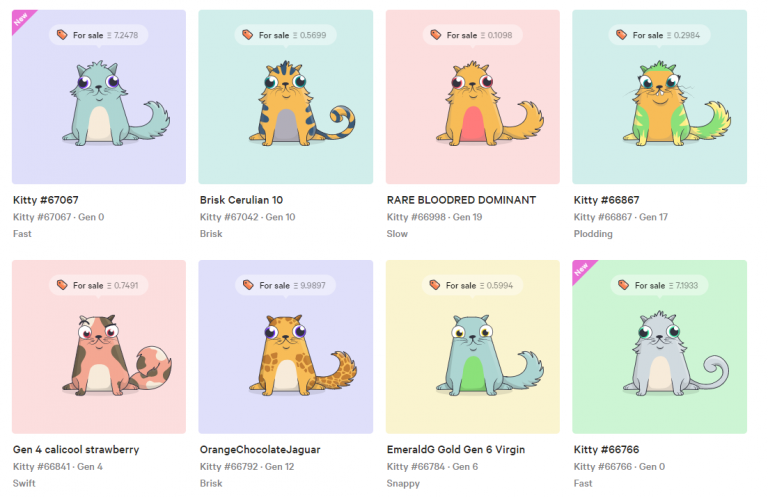 Even though it just launched last week, CryptoKitties, a platform for “breeding” and trading collectible digital cats, is already too popular for the network to handle, accounting for 12 percent of all transactions on Ethereum. Its sudden emergence has stressed the network, causing a significant backlog of pending transactions.

If you’d like to buy a “cryptocollectible” cat, first you need some of Ethereum’s cryptocurrency, called Ether. The most expensive one somehow went for more than $114,000, but the median sale price for a blockchain-secured, tradeable digital feline asset is currently $11.44 worth of Ether. If you buy two, you can use more Ether to execute a program that makes your digital cats the parents of a new kitten. “Think breedable Beanie Babies,” says the game’s website.

Cute. But the Cryptokitty-caused congestion on the Ethereum network is also exposing a core challenge facing blockchain builders: applications running on blockchains still are much slower than what we’ve come to expect from Internet apps. If Ethereum is to live up to its promise of being a “world computer,” its developers will need to answer a number of thorny questions about how to make it better able to handle large transaction volumes.

Still, the digital-kitty-induced transaction backlog has a silver lining, Peter Van Valkenburgh, director of research for the cryptocurrency-focused think tank Coin Center, argued on Twitter: “I love it when cryptocurrencies grind to a halt from actual retail-level use rather than attacks or politically-motivated spam transactions. I guess my cryptokitty will have that bun in the oven for a while, worth it.”