How Do You Get a House in a Steep Valley Forest Online? With a Drone 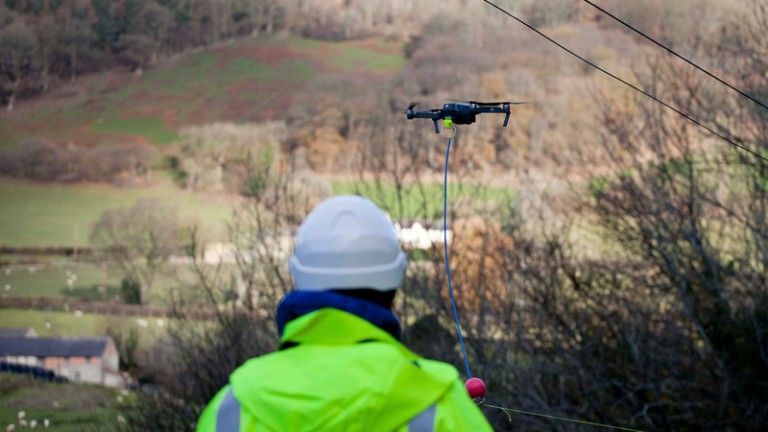 In the remote village of Pontfadog, Wales, getting a respectable data connection hasn’t been straightforward.

While the Internet infrastructure firm Openreach had managed to lay one-gigabit-per-second fiber to many homes in the area, it was left at a loss when it came to connecting 20 houses on the side of the steep, forested valley overlooking the village. As Silicon points out, it couldn’t get the right equipment to the location to dig trenches, and the forest canopy meant that wireless connections weren’t an option.

So how, exactly, did the company decide to get the fiber cable up the valley side and to the houses? “We figured the best option was to fly it in over the top of the tree canopy and then lift it up to make sure it was clear of the tree line," explains Openreach’s chief engineer, Andy Whale, to the BBC.

So they did—kinda. Actually, the firm used a DJI Mavic Pro drone to sling a 328-foot length of high-strength fishing line between two points above the tree line. That was then used as a path to haul the fiber across. Openreach says that it had the cable installed in about an hour, and that if it had tried to take the cable up through the forest using more conventional methods it could have taken days.

There are, of course, many ways to get Internet out to the sticks: in hidden spectrum, between TV signals, from balloons, beamed by stratospheric drones, or even sent down from satellites. But routing fiber using a quadcopter is a nice addition to the list.