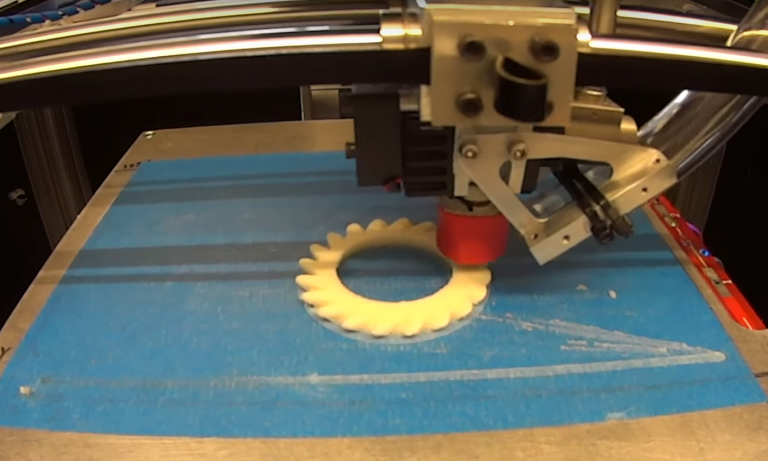 The video in this article hasn’t been sped up. What you’re watching is a new desktop 3-D printer built by MIT researchers that cranks out plastic items 10 times faster than other, similar printers. In a paper published in the journal Additive Manufacturing, MIT professor John Hart and his graduate student Jamison Go identified why current desktop 3-D printers are so slow and presented their solutions.

Interested in exploring more about the future of 3-D printing? Check out our webinar on 3-D printing in manufacturing today at 2pm Eastern. Register here—it’s free!

The main reasons printing takes so long, they found, have to do with the speed at which the mechanism moves while forming the item, the force applied to the material coming through the printer, and the low heating capacity of the machines. Their machine improves on these issues using a laser, a specialized screw, and a high-speed gantry. The screw mechanism increases the force on the polymer material by an order of magnitude, pushing it through the printer’s nozzle while the laser rapidly heats the material.

By combining this with a quick-moving mechanism that guides the placement of the plastic, the researchers created a hot rod of a 3-D printer. “If I can get a prototype part, maybe a bracket or a gear, in five to 10 minutes rather than an hour, or a bigger part over my lunch break rather than the next day, I can engineer, build, and test faster,” Hart says.

Hart is known for bringing speed to 3-D printing. Desktop Metal, the company he cofounded and one our Smartest Companies of 2017, will be launching commercial printers next year that increase the speed of metal 3-D printing 100-fold (see “The 3-D Printer That Could Finally Change Manufacturing”).

The remaining issue with their technology is that at the speed at which it prints, the plastic is often still molten as the machine moves on to lay the next layer of plastic on the top of it. This can cause distortion in the part. The team is working on a way to cool the object during the printing process.