This Autonomous Forklift Wants to Eat Up Warehouse Jobs 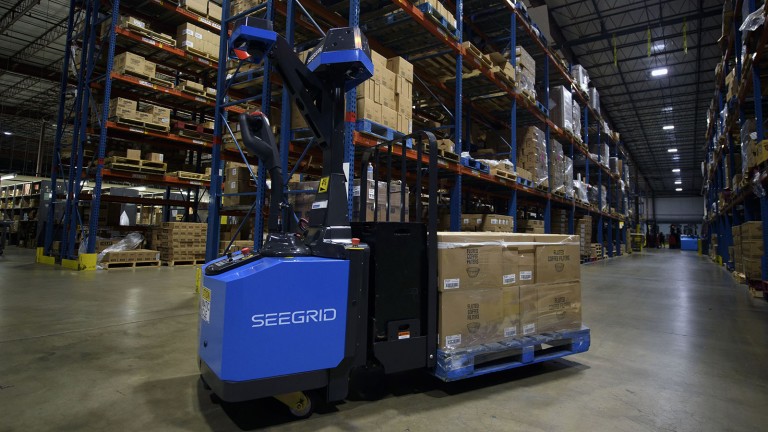 It may look much like a regular pallet truck, but this is one of a growing number of autonomous warehouse vehicles looking to take over from inefficient humans. Its maker, Seegrid, a provider of material-handling equipment, takes the kinds of forklifts that move 8,000-pound loads around warehouses and makes them autonomous. It does that by popping five stereo cameras on top of the vehicles, having a human drive them around to map a space, and then using image recognition systems similar to those in autonomous cars to navigate the facilities. (Unlike autonomous cars that use sensors like radar and lidar, Seegrid can use just cameras, because lighting conditions in warehouses are more consistent than those on the open road.)

But while it’s easy enough to have a forklift move objects from one side of a factory to another, reliably loading and unloading them poses a bigger challenge. Other robots designed to haul loads like this tend to pick things up from below, rather than spearing pallets with forks. So autonomous forklifts usually require humans to be present during pickup and dropoff to make sure nothing goes wrong. Seegrid says that its customers don’t really like that. “Humans are notoriously unreliable for repetitive tasks,” Jeff Christensen, Seegrid’s vice president of product, tells MIT Technology Review. “We look for the next incremental step that can take away one more human touch.”

So Seegrid's new GP8 Series 6 forklift, pictured above, has been engineered to reverse its forks into pallets, pick them up, and set them down without a human in the loop. It’s not been quite as easy as you might expect. “The stuff you wouldn’t think is hard is hard,” says Christensen. “These are tricycle trucks … so once you’re going in reverse it’s a reverse pendulum that you have to drive backward with fairly coarse motor control, so the tuning has taken a lot of time.” Still, it works, so there's another human touch that isn't required.