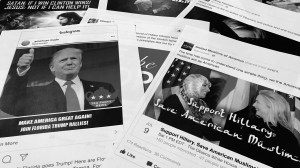 FILE – In this Nov. 1, 2017, file photo, Some of the Facebook and Instagram ads linked to a Russian effort to disrupt the American political process and stir up tensions around divisive social issues, released by members of the U.S. House Intelligence committee, are photographed in Washington. Russia’s interference in the 2016 U.S. election has generally been seen as two separate, unrelated tracks: hacking Democratic emails and sending provocative tweets. But a new study suggests the tactics were likely intertwined. On the eve of the release of hacked Clinton campaign emails, Russian-linked trolls retweeted messages from thousands of accounts on both extremes of the American ideological spectrum. (AP Photo/Jon Elswick, File)