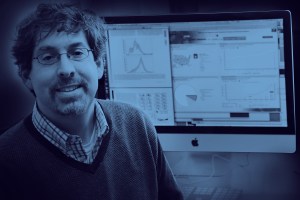 In this Thursday, Dec. 13, 2012 photo, Jeffrey Shaman poses for a portrait in his office at Columbia University’s Department of Environmental Health Sciences in New York. In the study of New York City flu cases published last month in the Proceedings of the National Academy of Sciences, the authors said they could forecast, by up to seven weeks, the peak of flu season. Scientists hope to try real-time predictions as early as next year, said Jeffrey Shaman of Columbia University, who led the work. (AP Photo/Mary Altaffer)