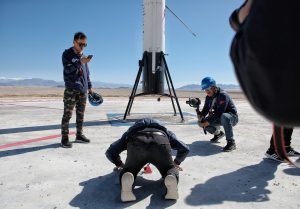 The RLV-T5 reusable rocket developed by private Chinese rocket science company, Linkspace, is pictured during a test at the designated spot in Mangnai city, Haixi Mongol and Tibetan Autonomous Prefecture, northwest China’s Qinghai province, 10 August 2019. The private Chinese rocket science company, Linkspace, has successfully conducted a third test of its reusable rocket, reports The Paper. The RLV-T5 reusable rocket landed successfully at the designated spot after flying to a height of 300 meters on Saturday in Mangya, Qinghai Province, according to the report. The landing accuracy of the rocket was greatly improved compared to the first two tests. Founded in 2014, Linkspace has been developing engines for reusable liquid fuel rockets. The 8.1-meter-long RLV-T5 rocket was put into production in May 2018. It is powered by five engines and has a takeoff weight of 1.5 tons. Linkspace plans to complete the assembly of its next-generation RLV-T6 rocket by the end of this year, and aims to begin testing early next year.